May 22, 2011
One of Issy's oldest friends is a boy from Mother's Group called Jonas.  They have actually always looked a little bit alike - at one point disturbingly so (I got accused of having twins by a random stranger in the park!).  Jonas' birthday is a week before hers and he wanted some more (real) chickens for his gift this year.  Our mother's group tend to buy as a group so people get one bigger thing they want rather than many little annoying presents.  By some cosmic karma, my friend also decided to give me a copy of Claire Garlands awesome book, Knit & Purl Pets.

I decided to knit him an indoor chicken to supplement the pressie.  I used a very soft angora wool blend in grey for the body and the just scraps I had left over for the other bits.  I have to say I was seriously impressed by the book.  There are some corrections (http://www.scribd.com/doc/54787878/KPpets-errata-Rav) but the patterns themselves are amazing.  The level of shaping is fabulous and after some time doing very stylised amigurumi and similar it was a lovely change. 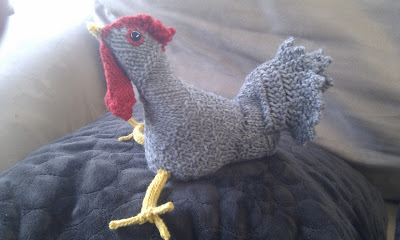 He loved the chicken and so did I - I might need to make another one soon!