Toys were pretty much it for June

June 29, 2011
I can't believe I have nearly missed June.  I seem to go through a few days of blog activity each month and then nothing for ages, despite various FOs in the meantime.  So this time I will group them together a bit I think.

First up is this: 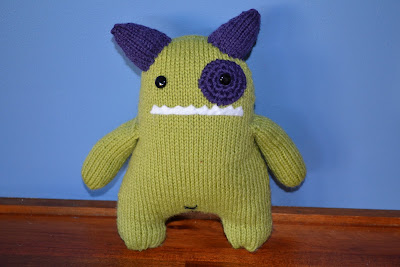 This is dot the dress up box monster from The Big Book of Knitted Monsters and I made him for my good friend Shalee's little boy Harry.  I wanted to blog him more thoroughly as they use something called the magic loop to knit smallish toys on a large circular kneedle.  Everyone else might know about this already, but I found it to be super cool - a bit tricky at first but works like a charm.  It stops the irritating ladders you get using DPNs (well I get them anyway).

His brother wants one too now, so I will do some step by step then as I don't want to forget this.  I made a baby hat the other day and wondered whether I could use the same technique but didn't have the confidence to deviate and try it out (and I was in a hurry...).

So I modified the monster every so slightly - his mouth is sewn on rather than stuck (sticking felt to wool kind of feels wrong) and his eye patch is crochet rather than knit as it seemed way way way easier. 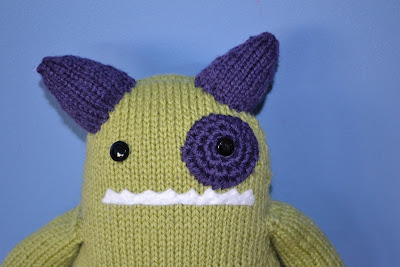 Speaking of knitting on DPNs...this is Ava's Hippo from Itty Bitty Toys.  I made this one ages and ages ago and then rather hoped my friend was having a girl as the soft pink result is lovely but not awfully manly.  This was made for Ava who was born a few weeks back at 35 weeks - she is just beautiful! 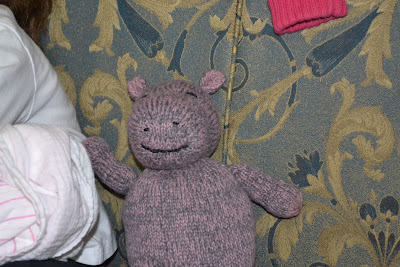 Sorry about the awful backdrop to the pictures - its a maternity ward sofa which are always covered in hideous designs.  The hippo was a bit overstuffed as I let my four year old help with that part. I was especially pleased with the finish or texture on this one (if that's the right word).  The pattern wanted a speckled wool and I had a soft pink and a grey...so I knitted the two strands together and got speckled :) 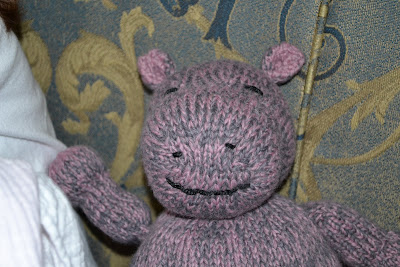 Finally we have Noah's dino.  I made him simply because Noah hasn't had a toy yet and he likes Dinosaurs.  I was looking for an excuse to make him.  He is another one from Amigurumi and I don't think I changed anything but the colours here. 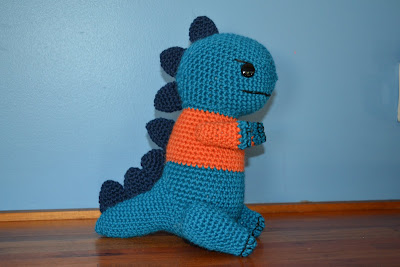 I am especially pleased with his grumpiness in the face - it's quite hard to get right!

So that accounts for a fair bit of June, though there are a few more bits to come.  See?
I have been productive, just not in blogging terms... 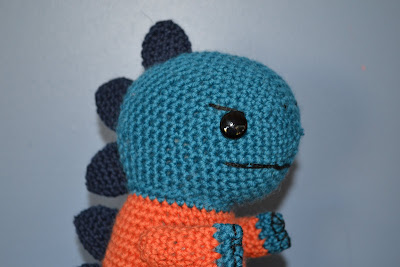