July 10, 2011
I love a good craft emergency - it makes me feel so useful when someone I know needs something they don't seem to be able to buy and I am able to whip it up :)

Two of these situations have occurred recently.  One was for my friend whose daughter arrived about 5 weeks early.  She is absolutely beautiful and perfect but her head is too small for any hats.  I used a cleckheaton pattern which I adjusted a bit (mostly by using smaller needles than the pattern requested - as it wasn't a premmie hat pattern) and some leftovers I had from other projects.  They are both the same pattern but in the first try (the white one) I didn't bother adding the crochet edging and just left the hat with the ribbed edge.  I thought it still looked OK and I didn't have her head with me to try it so the effort was kept to a minimum until I had a sense it would fit her. 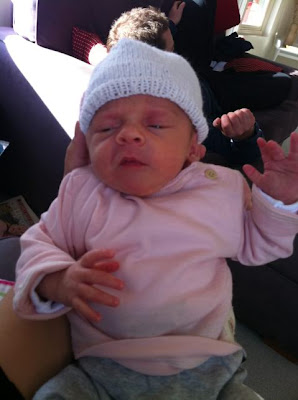 The second is the same hat in a lovely soft grey wool and cashmere blend with the edging specified in the pattern in a dusky pink (all leftovers which made this project even more wonderful!).  I think she looks lovely in both and I am very proud to have been able to quickly help out and keep her little head warm in our rather grim winter! 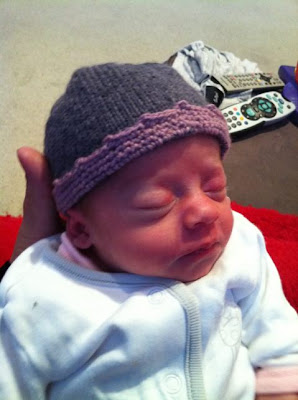 How lovely does she look?

The other craft-emergency of late was my friend's little boy breaking his leg.  Poor little man is only about 21 months and it was a bad break up on his thigh, so he ended up in a hip spica cast (both legs, set out in a kind of wide squat stance).  This makes getting any trousers onto him pretty well impossible, so my friend asked if I could modify some pants she already had.  As you can see the theory was just to velcro or pop stud whatever seams were necessary to get the pants on and secure.  In the end pop studs worked best, and I went for the inner seam (so he had to get them on over his head) so I didn't have to faff about with the waistband. 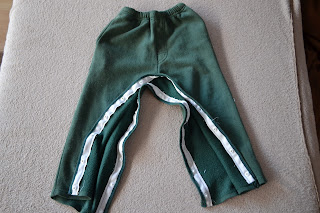 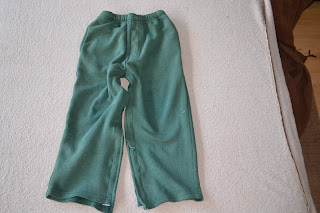 As you can see from the piccies, this isn't the most tricky or glamorous or even well-executed sewing but it worked perfectly (people didn't stop her in the street to ask what had happened as you could barely tell he had the cast on when wearing these!) and it gave me enormous satisfaction to be practical and helpful :)