September 10, 2011
When my daughter (now 4) and her friend Jonas from Mother's Group turned two I made them both a SB quilt from the Hungry Caterpillar Range (Eric Carle for Andover).  They both liked the book and the fabric range was gorgeous.

Fast forward a few years and my son is about to turn two and his friend Reuben (Jonas' little brother) is also hitting the big 0-2 (good timing for my friend and I!).  I saw the Brown Bear fabric range (more Eric Carle) and decided to use that for their quilt.  That way the quilts are complementary rather than matchy matchy - they would look great on bunk beds I think.  Reuben turned two a few weeks ago so I gave him this: 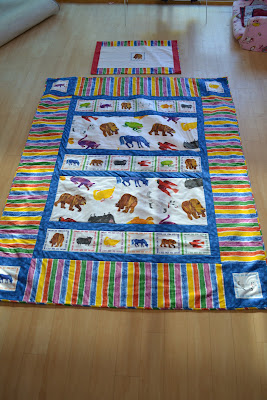 When I made the HC versions I made a single bed size, according to the old fashioned measuring scale where the quilt hangs down virtually to the floor on both sides (or gets tucked in) and covers the pillow and tucks under the end.  This time I decided to go much smaller (as when they are still quite little like this the bigger SB quilts are very unweildy and end up folded in half) and added in a contrasting pillow case.  So for Reuben his quilt is blue with a red pillow, and for Marcus I have reversed the colours (pics later when it's finished!). 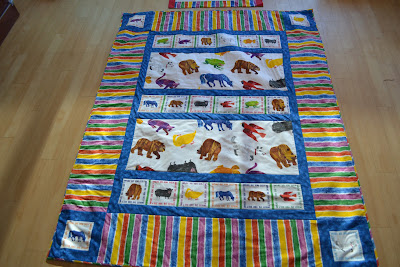 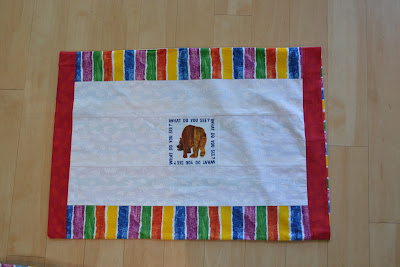 And of the (badly ironed) pillow case. 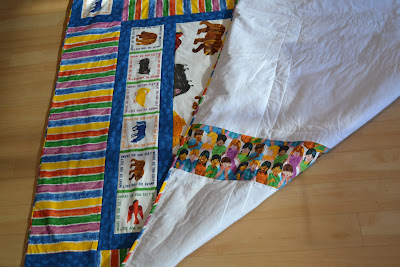 A picture to show the strip across the back.  I have to admit I was a bit disappointed with this fabric range when it arrived.  The HC range came with a panel which was really a panel (see below; the panel has the leafe, butterfly and caterpillar on it)  - this range came with something advertised as a panel but which was really just a piece of fabric cut off from the fabric made up of a lots of discrete squares bordered in green (which I used along the bottom above the stripey border).  Sadly because the fabric was continuous the cut off bit would have lost the green border top and bottom in seam allowances if you used the piece as a "panel" which is how it was touted.  So I made something up which was more based around the white fabric with the coloured animals on.  I was pleased with the result but it's quite different to the hungry caterpillar quilt (see below). 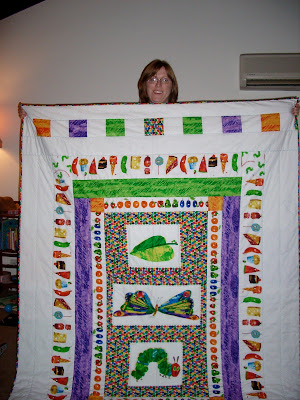 Additionally, some of the fabric range just didn't seem to match the others.  There were some which were the more solid, scribbly colours (like the purple in the HC quilt above) which were just horrible colours.  They didn't seem to even really match the animals, so I left them out and will use them for muslin making or similar!

All up though I was happy with the quilts and pillowcases I made, and even got a bit nicer about presentation and tied them up in a bundle with some left over binding strip. 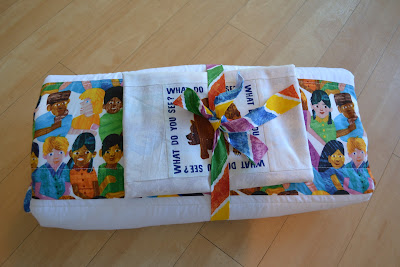 Better finish the other one before Mr M's birthday so I can post that too...