September 10, 2011
I love the idea of the Valori Wells sewing cards - so simple and cute.  I got the Birds Eye View Quilt one which I haven't made yet and also the Little Cell Phone Wallet which I whipped up the other day. 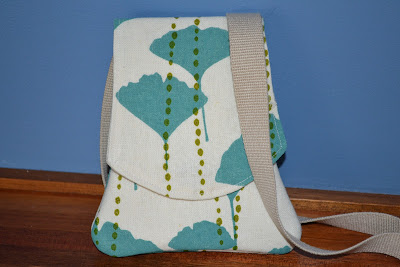 I love it!  I made it from a Duckcloth linen (I think...its certainly heavier than the normal quilting cotton I use) piece which I picked up at the craft fair this year.  They had a basket of remnants and offcuts which were all $4 or $8 depending on size.  I also got the webbing for the strap at the fair - we don't get a big range of that sort thing down here and am now seriously wishing I had bought a lot more... 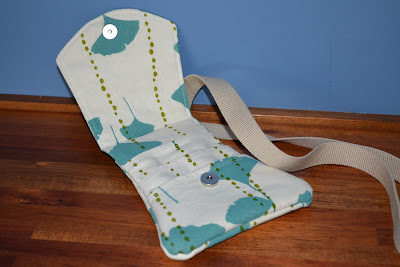 The sewing card picture uses various different fabrics inside and out, but I wanted to keep it simple and just use the (lovely) one I had.
I absolutely love the final product.  Am thinking of sending it to my sister for her birthday but I kind of don't want to (I want to keep it for me!!!).  However, I should probably be a bit more objective and review the pattern rather than just raving about the finished product (have I mentioned I love it?!!).  So here goes with a bit of a review:
The pattern cards are a great idea, but the Little Cell Phone wallet has a few omissions / areas where it could be improved.  Firstly, the attachment of the straps was a little unclear to me.  As the picture below shows, they are attached to the back pocket.  I have done a fair bit of sewing and so didn't fall into the trap of attaching them too close to the edge, but I think someone who hadn't done a lot of this sort of thing might.   I think including their placement on the card diagrams might have been a good idea... 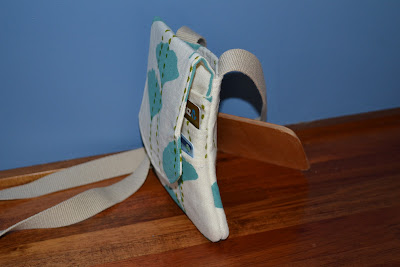 Similarly the instructions for attaching the magnetic snaps are awful.  Well maybe not awful, because she doesn't know which kind you would buy, but perhaps in the wrong place.  You get right to the end of the instructions and it says "attach the snaps...according to the manufacturers directions".  I read all the way through and realised I needed to deal with snaps a lot earlier than this but a novice sewist might be a bit stumped about when to do these things.  My snaps are the ones with prongs on the back which you insert from the right side to the wrong side (preferably on a piece of fabric which is interfaced or at least has been reinforced at the point where you add a snap with an appropriately sized square of interfacing).  You then put a washer over the prongs and push them down to lock the snap in place.  How anyone could even try and do this once the thing was sewn together I don't know.  I realise there would be other types of snaps which might be sew on once finished, but perhaps a note a the start about deciding when this should happen and about trying to use the interfaced piece where possible would be of benefit. 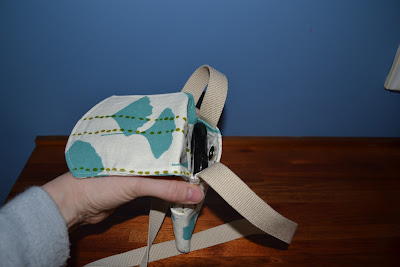 Another issue is that my cellphone doesn't actually fit...I can't blame a pattern designer for having a largeish phone, though I don't think an iPhone will fit either, and they are pretty common.  It does fit on the inside biggest pocket so that's no drama, though perhaps a note about measuring things and advice on extending them would be good.  Not sure how you would fit that on a card though :) 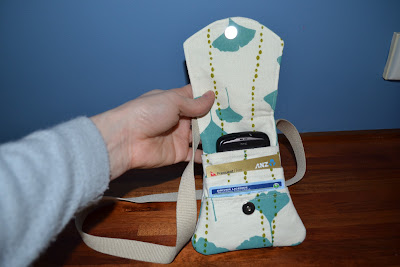 I think I might modify this design a bit to have a zip pocket on the back for change and then keep the phone inside, or perhaps lengthen the back pocket and therefore the overall length.  A few other issues as follows:
So it sounds like I am totally bagging the pattern out but on the whole I enjoyed making it, I love the end result and I was easily able to adjust as necessary for the stuff I have noted above.  It was super quick to make and pretty simple once you read the instructions a few times to make sure you understood how the layering thing worked.  It is a total contradiction to what I have said above, but the simplicity of this was great - a lot of bag patterns are soooo unnecessarily complicated and take ridiculously long to make.  I get that some of the things I have mentioned here are not explained in great detail to achieve this simplicity and fit the thing on a card...it's just observations I have about it really :)