Anyway!  I have a 4 year old girl and a 2 year old boy.  I have therefore more recently invested in boy type patterns and have been trying to redress the balance in terms of sewing nice things for both of them.  I have found a dearth of cute boy projects (free or otherwise) out there - when compared to the wealth of girl stuff; as noted recently on handmadebyalissa here and in various other places too.

Just before Christmas I sewed a pair of PJ pants for my nine year old nephew and a pair of shorts for my two year old son in quick succession.  For both items I used a shorts pattern and I just lengthened them to full length for the PJs.  The PJs were the Oliver + S Sketchbook Shorts and the shorts were the Sewing for Boys Mimi's Boy shorts, without the suspenders.

I made the Sketchbook shorts first.  Here is the super cute picture on the front, though my nephew is a little older than this!

I had the 5 - 12 pattern and based on his measurements I cut a size 8, with custom length as appropriate for his legs.  I just measured from the waistband down to the length my sister sent me for his waist - ankle measurement (they live overseas) and then added a bit for a hem (an inch or so).  I then just traced the pattern down to that point - most PJs don't narrow especially much between knee and ankle, so there wasn't  much to do here but draw a fairly straight line down to lengthen them to trousers.  I made them out of some blue striped flannel I had which I think is part of the Valori Wells Bliss range. 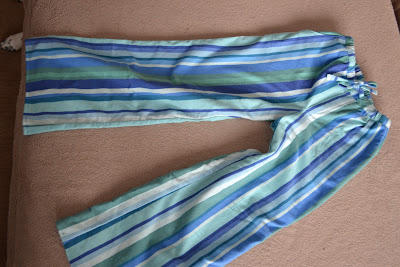 Instead of the elastic between the two front pleats I decided to run the casing all the way around to about 1 inch either side of the front seam.  I then made a tie out of a strip of the flannel.  I cut a strip 2 inches wide and about 4 - 5 inches long, fold in half and press, unfold, fold raw long edges into the centre crease, then fold in half again, enclosing the raw edges.  Stitch up the edge to form the tie which will be a 1/2 inch seam.  I then sewed one end to some elastic, threaded that through the casing and worked out roughly how long it needed to be to bring in the waist.  I then cut the elastic to size and sewed the other tie to the other end.  I made sure the ties were long enough both to be pulled fairly long without exposing the elastic and also were long enough to tie a reasonable bow.  You could still measure the elastic more precisely and sew it into place, but that would make the ties mostly cosmetic which would annoy me.

The pattern itself was mostly well written and easy to follow.  I particularly liked the advice re whether to topstitch depending on fabric type.  I don't like that patterns don't give you advice on elastic length for a particular size.  I understand that it is ideal to measure that on the person (especially for children who can significantly vary in body shape with sticky out tummies and so on) but when you are making it for someone overseas it would be good to have some rough advice on what length of elastic will offer a reasonable fit for a particular waist measurement.

The second pattern was the Mimi's Boy Shorts pattern.  This pattern comes with suspenders in the book, which look cute but didn't seem to suit my little man.  I read the pattern a few times and realised they weren't integral to the shorts holding themselves up, so I just skipped those steps. 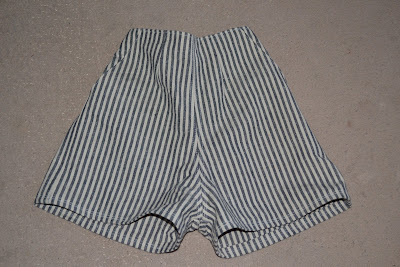 I made these in some striped linen I got a remnant from Duckcloth at the Melbourne Craft fair (I think the piece cost me about $6).  I did the waistband facing and pocket linings in a grey linen from Tessuti.  Very posh for a small person!

The construction for these shorts was pretty similar in some ways to the Oliver + S pattern but the pattern seemed easier to follow and more usable somehow.  I think in particular the suggestions on seam finishes were especially helpful - rather than just saying "finish the seam in your preferred method" they usually say something like "we like the hong kong finish" or similar.  This is really helpful for someone who is OK with trying new techniques (particularly when they are well explained / diagrammed as they are in this book) but who doesn't necessarily always have the knowledge to choose a finish.  I can serge/overlock or zig-zag seams easily, I can make a french seam or a turn under and stitch type seam.  What I can't always do is determine which might be best for a particular place in a pattern (i.e. somewhere you might want less bulk or no irritation against the skin or whatever) without having made it before.  By suggesting a particular finish here the writers offer their experience in making these choices.

Here is the dude in the article concerned (the vest is witchery and gorgeous).  This picture doesn't show the shorts that well, but it does show him nicely :) 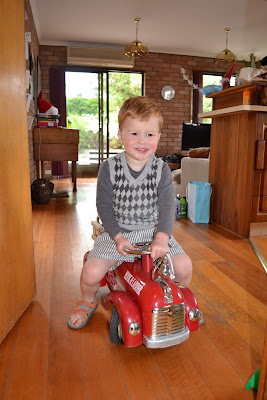 Interestingly, I am now making a version of the Little Heartbreaker Pants from this book for my daughter's school pants.  The construction is pretty similar to these shorts so it has been nice to almost make them again using a different fabric and a few adjustments of my own.

Of the two I would definitely choose the Sewing for Boys version over the Oliver + S for preference, though I would use both again (and in fact the greatest downside is the small sizing of the Mimi's Boy - they go up to  a size 5, where my O+S pattern is 5 - 12; though I could substitute the larger sizing of the Little Heartbreaker Pants and just make them shorts). 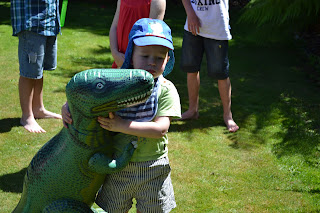 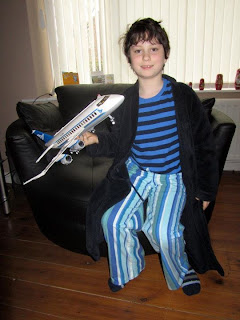 Here are the two boys in their PJs and shorts with their favourite toys :)