Jacket for Marcus (sewing for boys)

May 31, 2012
This is another from Sewing for Boys by Shelley Figueroa and Karen LePage. 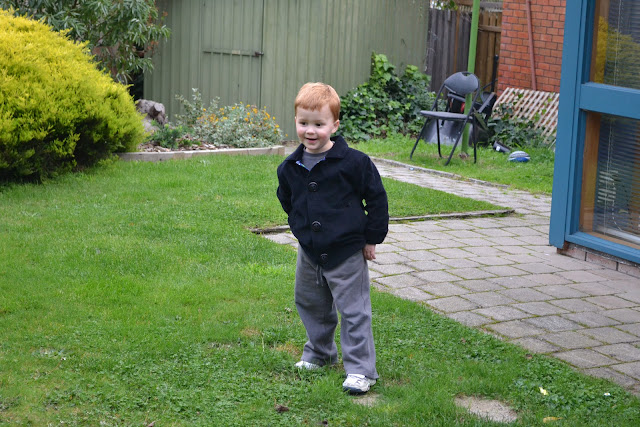 It's the 2-in-1 jacket, modified a bit to make it non-reversible.


I modified the jacket because I wanted to put lining fabric in the sleeves.  Last year I made the MakeItPerfect Downtown Boy jacket, which is also reversible (pre-blogged).  It was a great jacket and looked fantastic on both sides, but it was a pain to get on and off when he was wearing a jumper or something grippy.  He is in the "I can do it myself" phase and so anything to make this process easier is probably worth the effort!

I made the outside in black pin-whale corduroy.  I love how this looks, except that it picks up every single bit of lint which in my house are all suddenly white or light coloured.

The sleeves are lined in black acetate lining fabric, which I cut a few inches shorter and then attached a strip of corduroy to the bottom.  This means you can turn back the cuff a bit without showing lining.

I used a quilting cotton for the inside except for the sleeves, a cute blue with cars all over it.  From memory the collar should have been different on either side, but I made both sides corduroy as I don't ever intend for him to wear this inside out.

Those were really the only pattern modifications I made.  The whole thing was easy and quick to sew, even with the details like welt pockets (see below) and I really rate this book.  I wish I had time to take part in one of the sew-a-longs for the book which have been going on, but the sewing time I get is patchy and prone to mad rushes in the lead up to birthdays or similar.

I used quite large buttons which he commented on while wearing it the other day.  He said:  "look Mummy, really big buttons!  I LIKE big buttons".  This was most pleasing :)

The tricky bits of this pattern are the notched collar (which you can see an annoying little tuck in in the picture below) and the welt pockets, which are sadly just about invisible in all these pictures.  I should have laid the coat out and taken a few non-Marcus-distracting pictures, but these were so much nicer for me to use than close ups of sewing details...the welt pockets went mostly OK.  The pattern did recommend doing a test run (a muslin pocket...!) if you hadn't made them before.  I got by without doing that but it may have been easier were I not working with corduroy the first time I ever made them.  I am not awfully good at visualising from instructions, so again the "pocket-muslin" might have been wise.  On the other hand, I am reasonably happy with how they turned out so...

And apparently so is he: 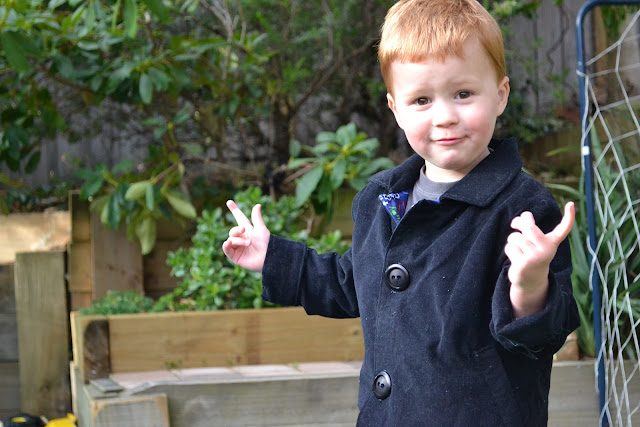