Anyway, as soon as I saw the Oliver + S School Days Jacket and Coat I wanted to make one every year for the kids.  The pattern is apparently out of print (not sure why they seem to take popular patterns out of circulation so quickly...) but is now back as a digital pattern.  Happily for me, I have the non-digital version (most digital patterns are bloody awful) and decided to make one for Issy for this winter.


I used a wool suiting in a lovely soft orangey red colour from Spotlight.  It was on special (or maybe I had a voucher) and ended up being around $10 - 11 dollars a metre.  I lined it with silk polyester lining (also Spotlight) which was in a kind of beigey gold colour.

I cut a size 7 (except where I mucked up and accidentally cut two pieces in a size 8 and had to adjust and trim in a few places...) and it just fits well enough to wear now without swamping her.  She wears a 7 or more usually from shops, so I was loath to cut less than the seven and she seems comfortable in it.  So comfortable, she wore it for most of her tennis lesson, hood and all:

I made view B, which has buttons on the tabs rather than toggles.  I interfaced the two placket pieces on the front to better support the snaps inside.  The coat closes with snaps on the inside and then also the buttons and tabs.  I had to redo the snaps with extra interfacing after switching from sew on ones (which were so hard to undo she would have seriously struggled) to a magnetic bag-type closure with prongs to stick through the fabric and be bent closed on the reverse side.  Note to self:  these are seriously hard to retrofit when the thing is already just about complete!!!

I not only swapped the snaps at the end of making this, but also the buttons.  I had some supremely cute orangey flower shaped buttons which were kind of translucent.  Sadly they both showed way too much of the button hole behind, which spoiled the effect, and they were also really hard to do and undo.  Instead I found these super lovely wooden buttons with flowers and birds painted on them at our newest Hobart wool shop, The Stash Cupboard.  That woman knows how to pick buttons - she only has a small selection (being a wool shop...) and they are pretty much all gorgeous!

I should really make more notes about the pattern as I sew them, as I don't have much to report on this one either.  I found it mostly easy to follow, though I recall the pocket construction descriptions were ridiculously more complicated than they had to be, for what was a simple and quite nice method.  Some of these more boutique kids patterns tend to assume no need for nicer finishing and more complicated techniques, but I thought this one rose above that to a new level (perhaps the higher "scissors" rating of difficulty indicated that?).  The handling of the lining in particular, to make sure it wasn't constrictive inside the coat was good and something I have never sewn before.

I didn't make the inside jacket (a kind of fleecy vesty lining option which you can make with or without sleeves for extra warmth) as this coat is well warm enough.  I think next year I might make one for both of the kids out of raincoat fabric with a fleecy liner - Hobart is warm enough that big coats aren't needed all that much but wet enough that this would be a good option to cover Autumn through to Spring I think.  That was my plan this year but of course the dearth of good dress fabric shops down here meant there was no raincoat stuff around when I wanted to buy it (Spotlight later got some in, though it was all a bit icky design-wise anyway).  Then I found this wool and it was such a good colour for madam that all was well.

And most importantly, she loves it :) 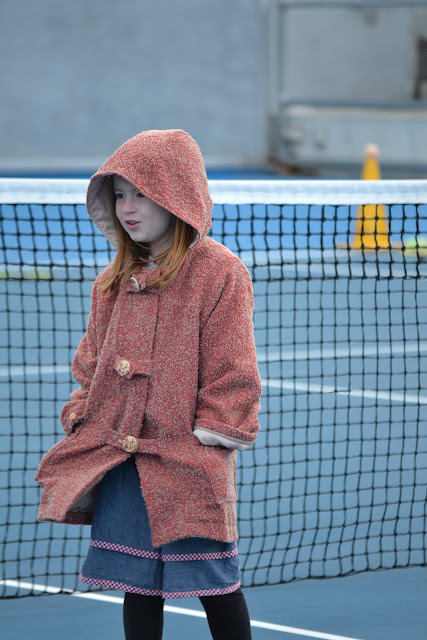