October 23, 2014
Some time ago (like yonks!), Grainline released the Archer shirt.  Like many others, I enthusiastically bought the pattern, traced it out and set about making one.

Not very long into the process I realised that I didn't have enough of my chosen fabric for sleeves :( Given I was living in the middle of a Tasmanian winter, I put it away and got on with other (warmer) things.

Now I live in Sydney, with a personal mission to finish some shit off (smaller house, more visible WIPs pile, slightly sarcastic husband...). So I got on with sewing a sleeveless version - here it is: 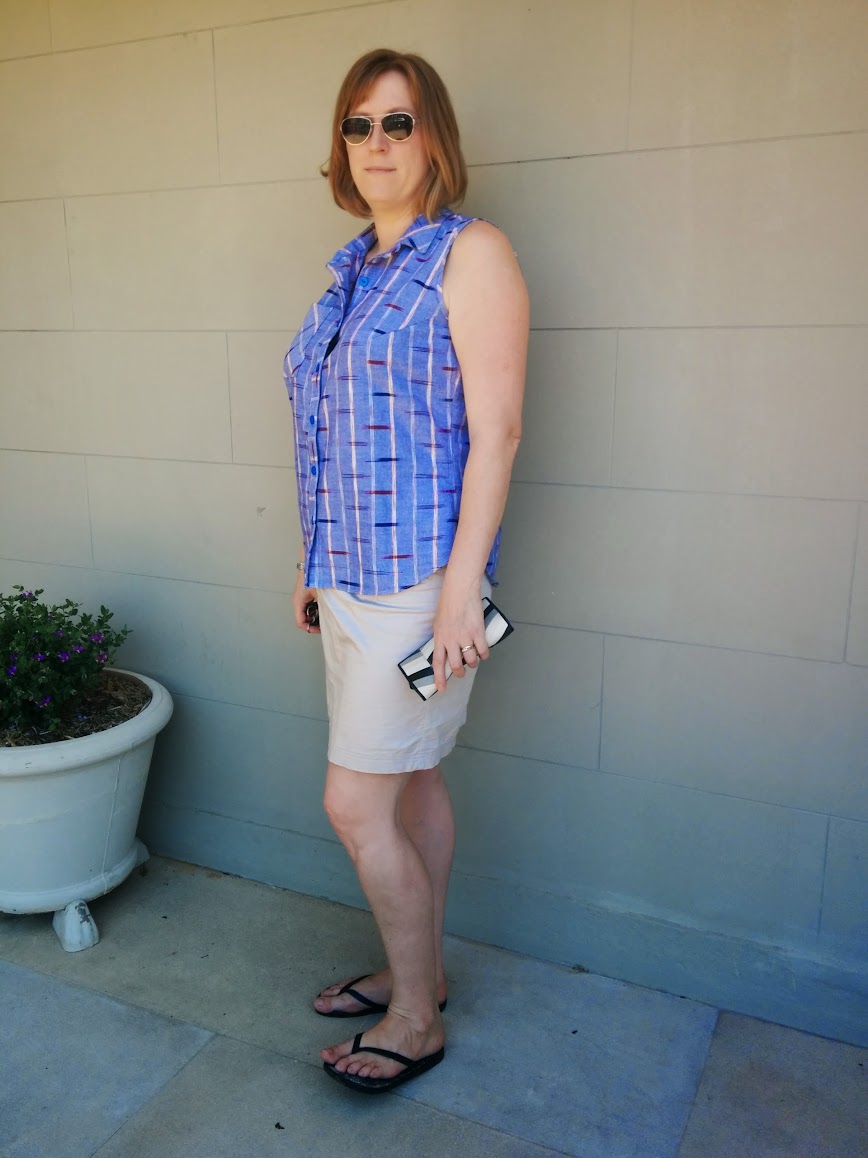 I like it.  I would make it again in a slightly more drapey fabric though to be honest, it's now what I would classify as a "sort-of" Archer.  I had to seriously modify this to get a fit I liked (more on that below) which I should say is less to do with the pattern and more to do with me, my body and my approach and my preferred fit. 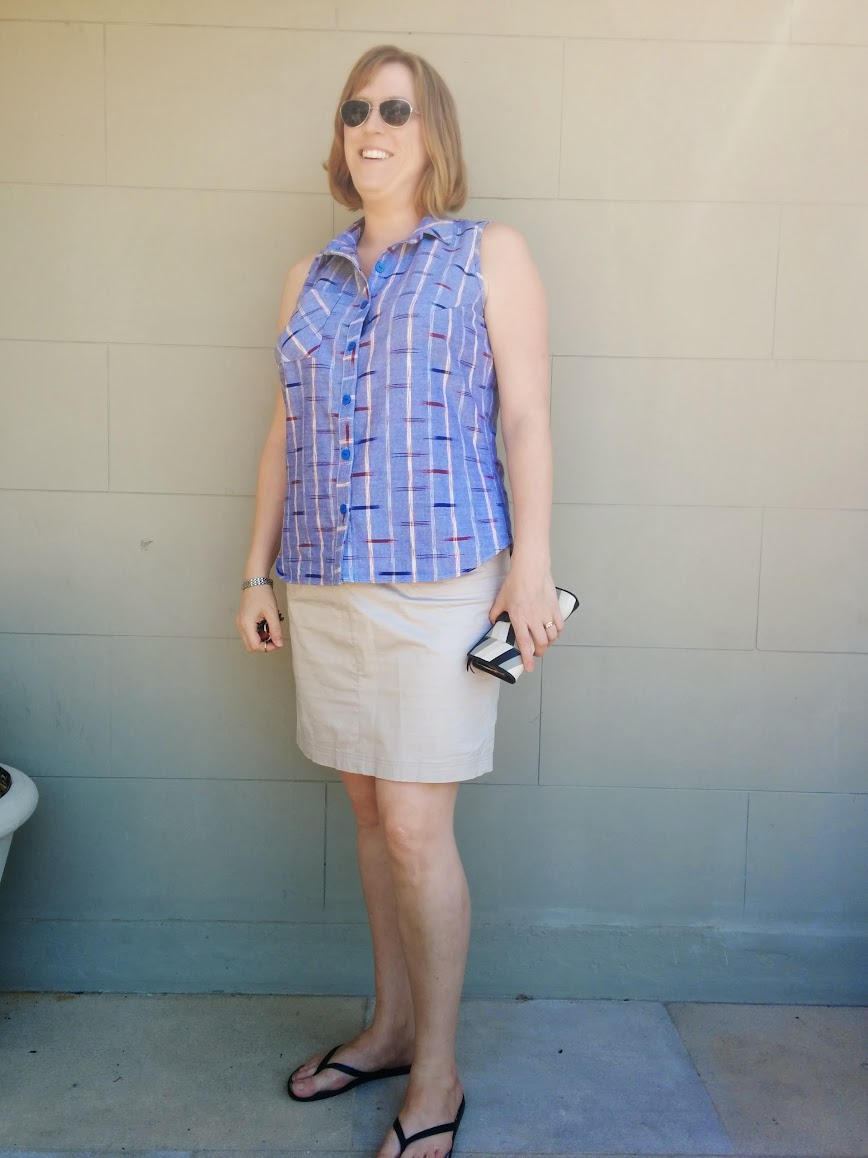 I don't think the fabric is drapey enough and the fit isn't yet perfect enough to be flattering (the shape and cut of the skirt probably isn't that helpful here either). 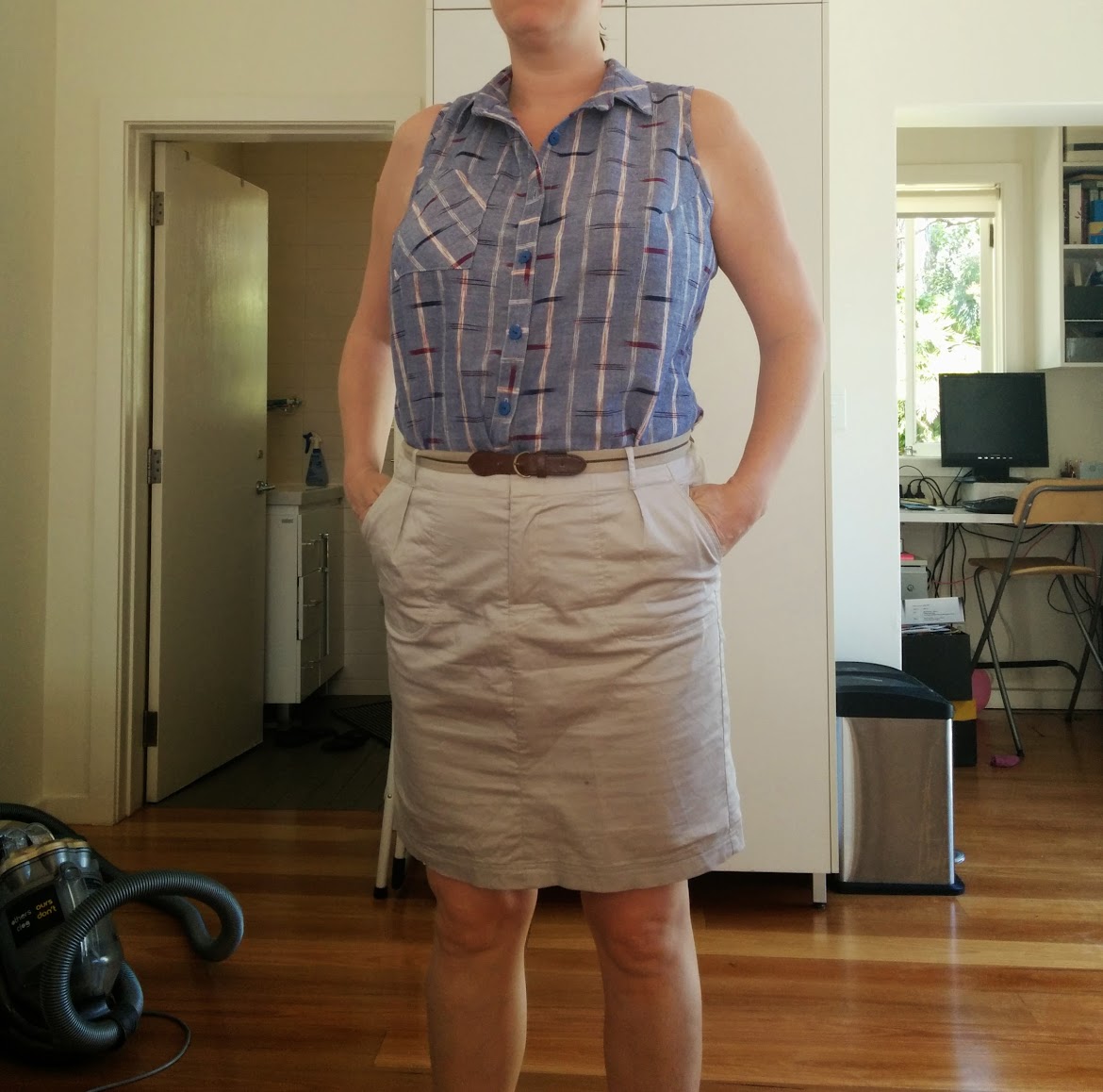 Here it is in on Jesse, mostly to prove I am using her :)  I had to do some serious bra-stuffing to get something like my measurements, and she is actually slightly fuller than I am at a couple of places, but I thought that was better than slightly less full, which was the alternative.  I didn't seem to quite get it in between. 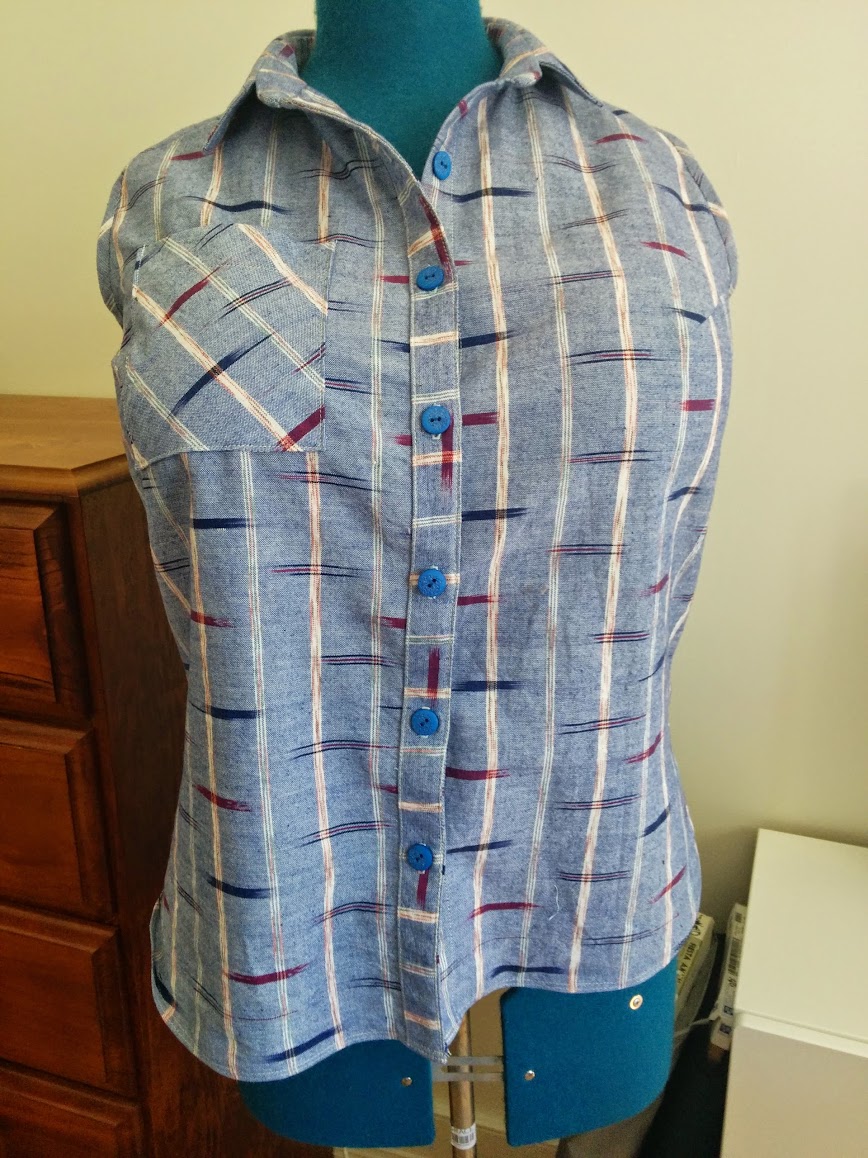 I put the pocket on the cross grain, to avoid having to do any stripey matching 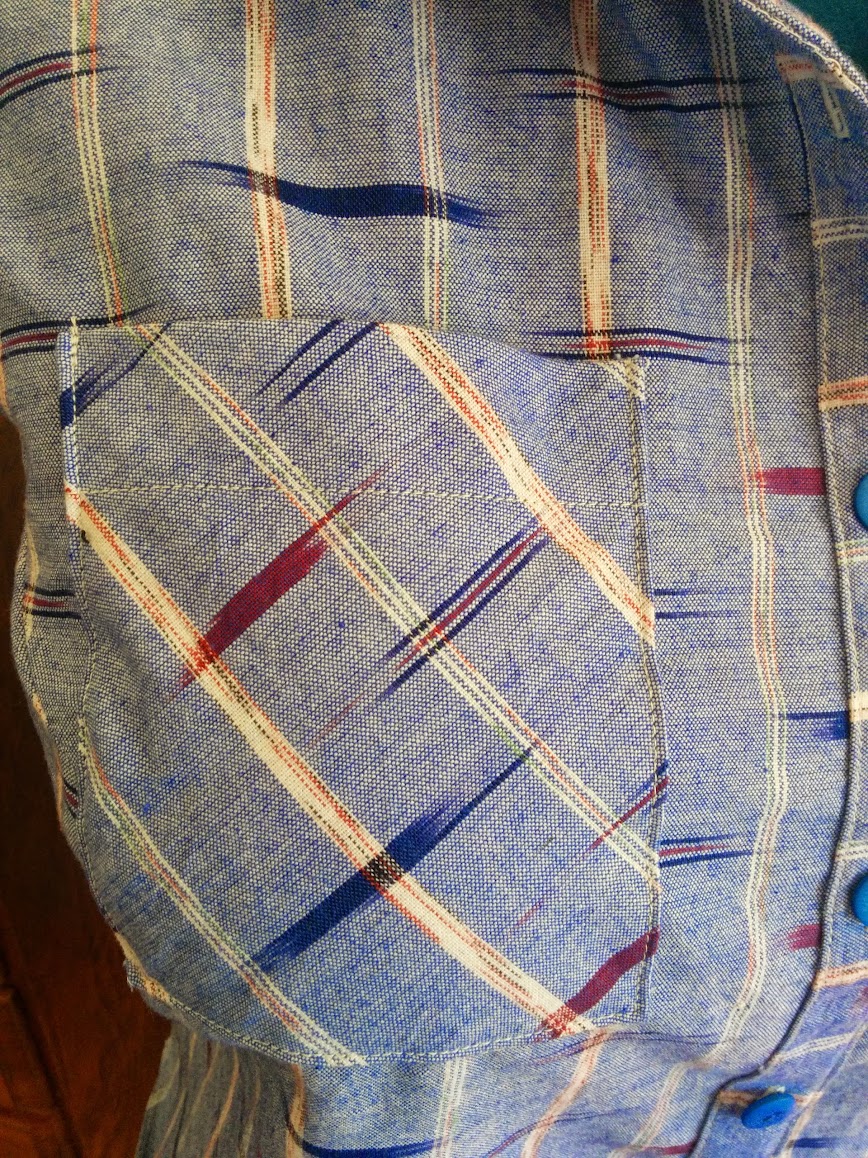 So I think it looks quite good, but the journey to that point was somewhat of a marathon.  As I cut this out a long time ago, it was back in the day where I thought cutting the size matching the ample bossom then adjusting everything else was the right plan of attack.  This is how I started after sewing the first seams: 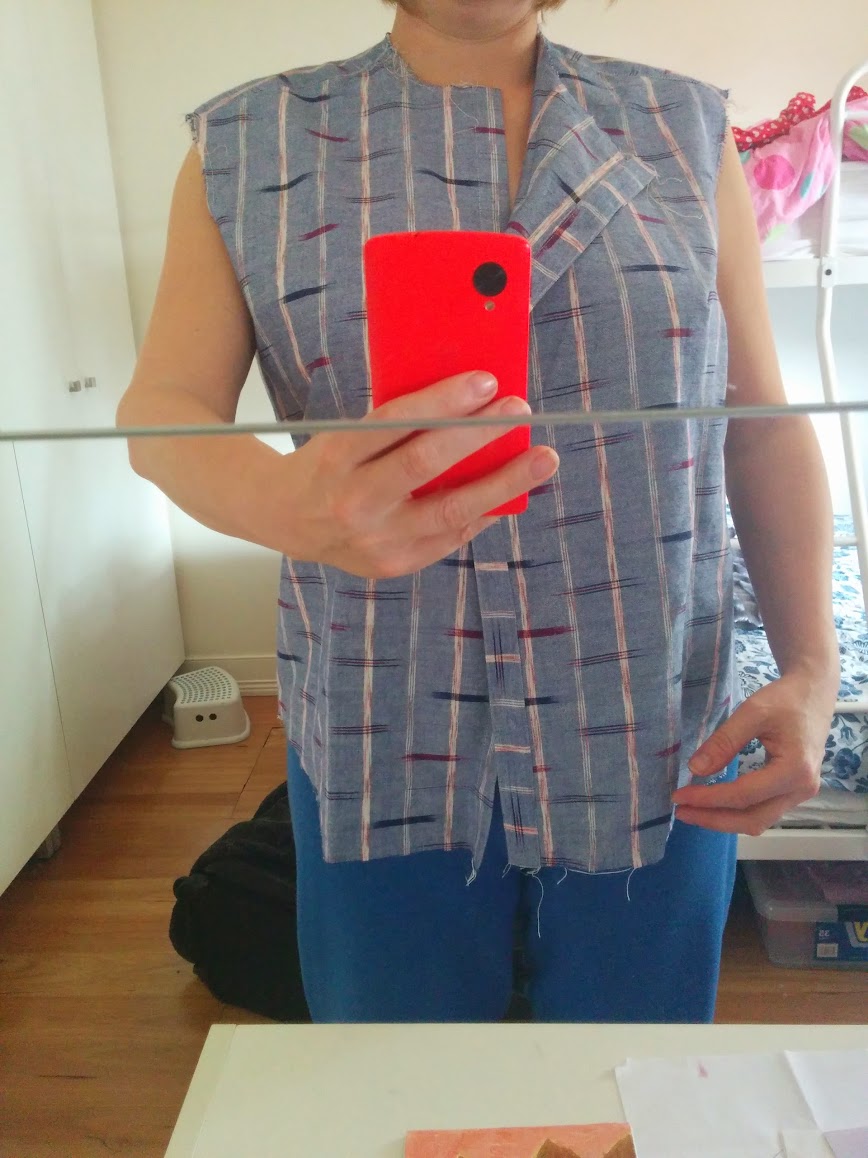 The pictures aren't terribly clear, but the thing was enoooooormous.  The pattern is intended to be loose fitting, so combined with me cutting for my largest measurement rather than perhaps the most common size with an FBA, it was mucho grande. 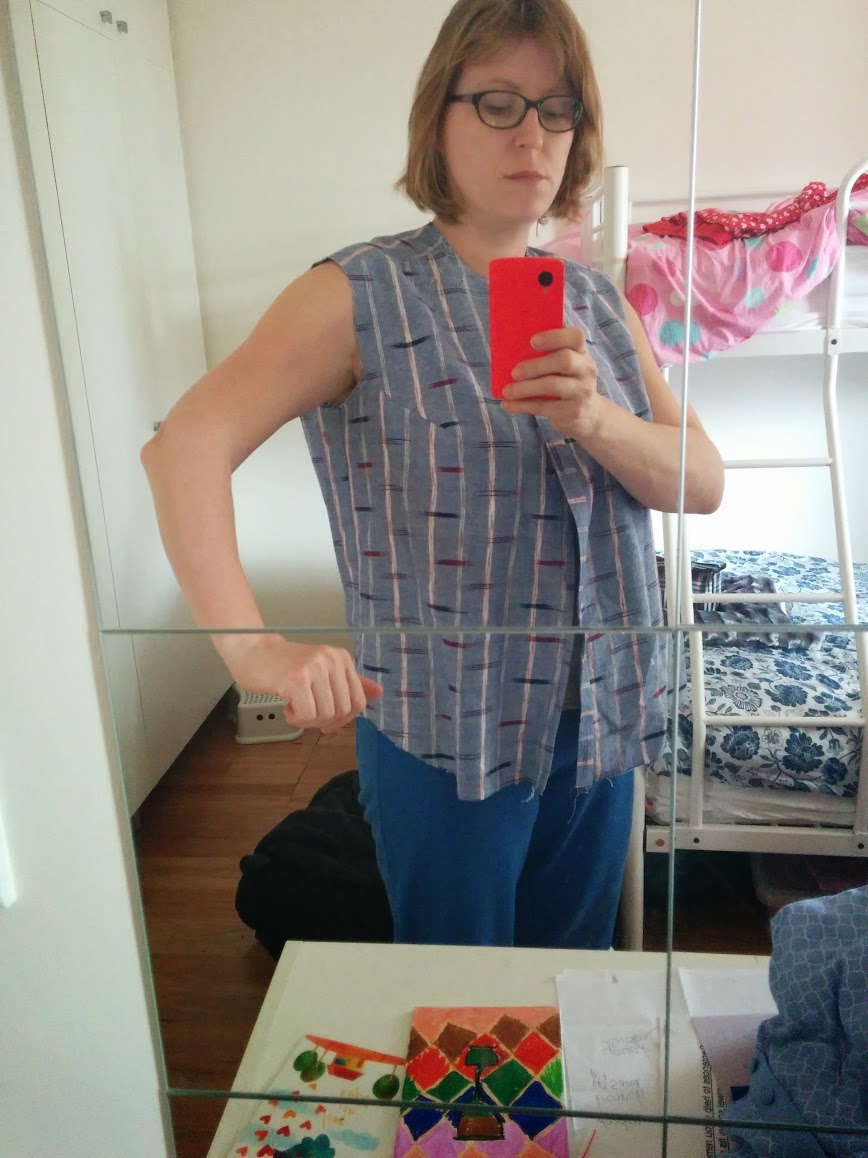 Even after adding some bust darts (which aren't in the pattern), there were still inches of spare space at the armhole. 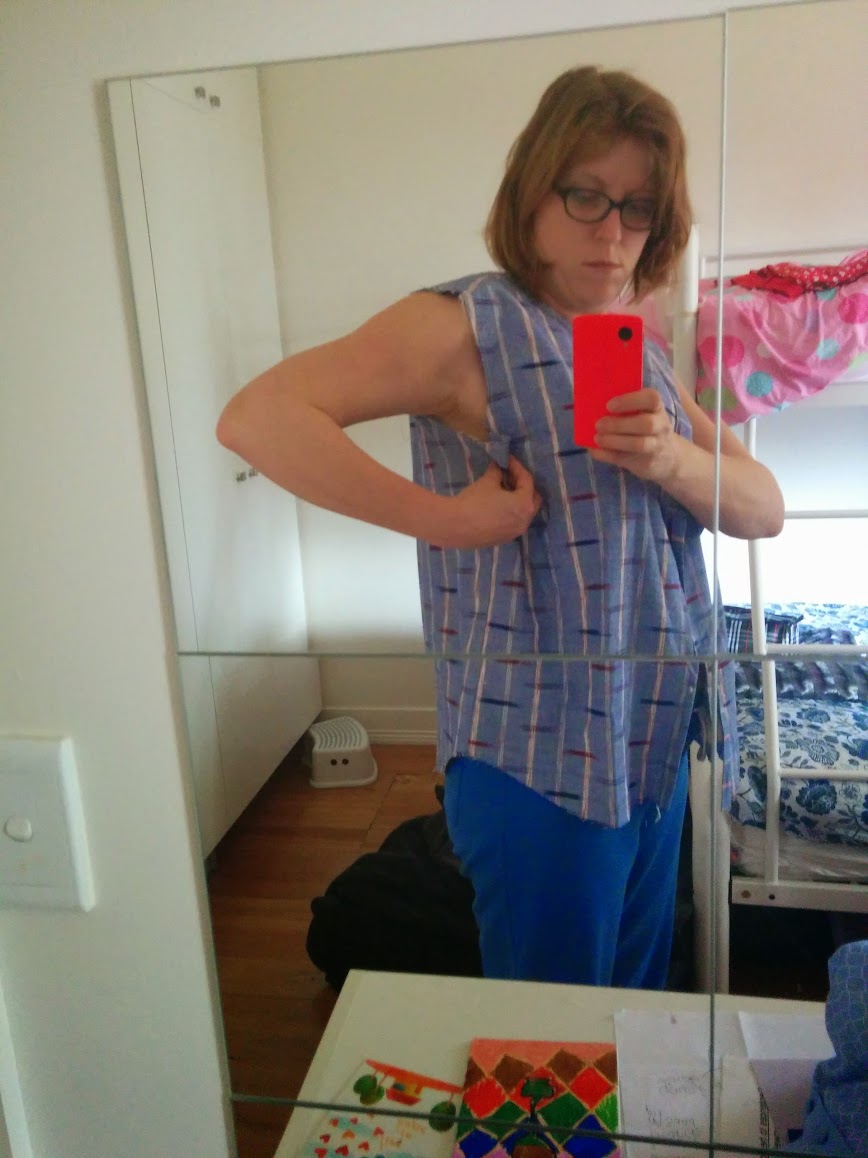 I added significant bust darts, took inches from both the front and back at the sides.  I also shaped the sides to come in towards my natural waist and then back out over the hips.  I bound the armholes and the hem, instead of turning it up and stitching.  It felt like it would be too short if I turned and stitched as the instructions suggest, plus this matches the armhole treatment which felt appropriate.

Overall I like the result, but I question whether to make it again following this method.  I *should* cut a smaller size and then do an FBA for the ladies, plus perhaps some additional shoulder room. However, this shirt is supposed to be loose fitting, and I am not sure that's actually what I want and is flattering. I might want to try something with princess seams instead.

I guess I will think on it while I carry on with the pile! 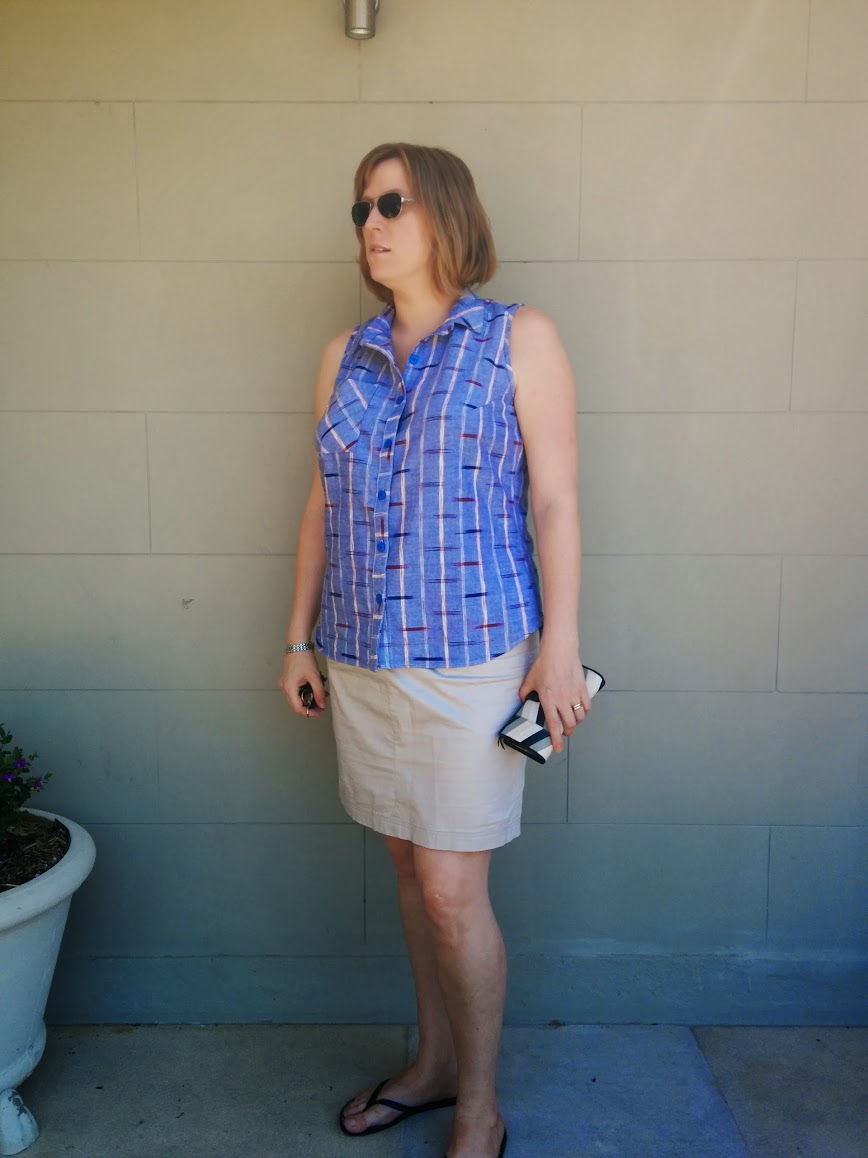