March 20, 2011
One of the biggest disappointments I have had making things as gifts was when I gave a friend's daughter a cool (I thought) skirt made of Angelina Ballerina fabric.  She was delighted mostly, but put it on and moved and said "Oh, it doesn't twirl".  In that single moment I thought:  "Oh, you are right".  And she was.  The skirt was great but it really really needed to twirl and it didn't. 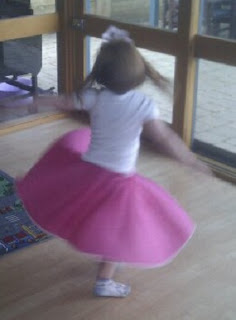 So for my latest project I picked the brains of Jill from The American Patchworks in Hobart (our sewing guru).  Apparently the key to supreme twirlyness is to make a doughnut shape of fabric, rather than sewing straight bits of fabric together.  This makes the waistband and bottom edge harder to deal with as they are pretty curved and also sometimes bias along the edge.  However, as the picture to the left attests; this trickiness is well worth the effort.

The skirt in the picture was cut from a normal width 110 cm long piece of fabric.  We folded it in half and then half again and then cut a curved piece out around 4 inches from the point of the folds (making the waist circle - the centre of the doughnut) and then again around 20 inches from the point (making the skirt around 16 inches long, give or take a bit for hems etc).  We attached a bias-cut casing for the waistband and threaded elastic through it and sewed ric-rac around the bottom edge (with the bottom of the ric-rac sitting on the bottom raw edge of fabric).  We then turned up the bottom edge on the ric-rac sewing line and top stitched close to the edge.  This left the top edge of ric-rac (reverse side) pointing out the bottom; giving a cute little wiggly hem and avoiding the need to fold up and up again to make a proper hem.

I could make about a hundred of these - it took less than a few hours to make and that included a lot of fiddling and working out I wouldn't need to do again.  And the sheer delight was amazing - the hardest part was getting it back off her after doing a quick waist measure before I seamed the elastic together.  Am going to try and make another one in a double layer of tulle/gauze for dancing next.  I suspect it will be tricky (slippery fabric!) but she would be beside herself.

Meanwhile, back to the crochet...