Finished Off! Infinity Scarf for Me!

April 24, 2011
So after many many double trebles (in UK terms) I have finished off the softest and snuggliest scarf/cowl thing for me!  I used Sirdar Juicy DK which is bamboo and cotton (in Papaya).  The pattern called for a smaller gauge wool (like a sock wool) but this worked perfectly, even with the same size hook. 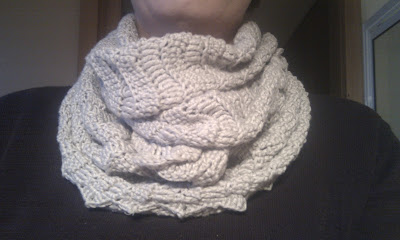 I love it.  Even after (as usual) doing it wrong by deciding the pattern was wrong and the thing was too big and then realising / remembering that it gets looped over itself and having to unpick some and keep going I still love it and would make it again.  It's Kim Miller's Infinity Scarf which can be downloaded from KnitPicks (though you need an American "shipping" address even for emailed patterns which is a stupid) or purchased through notsewcute on Etsy.  I modified it ever so slightly and also didn't add the fringes - I think if it was black the fringes would be good but I love it just how it is.