July 25, 2011
I really often struggle to make things for our house and our kids when there are so many birthdays in the year to make stuff for.  I love making presents for people and they are usually seriously appreciated, but I also have a list as long as my arm (actually quite a lot longer) of things I want to make for us.  So, finally, I managed to finish off a quilt for madam as shown below: 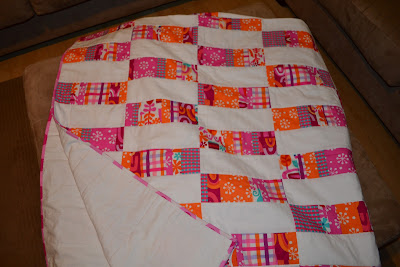 I used the Rainbow's Garden range from Prints Charming which I bought ages ago.  I wasn't sure about cutting it up so heavily (some of the designs are so lovely you just want to leave them in massive blocks so you can appreciate them fully) but I think it worked really well.  I cut random width strips (varying between I think 1.5 and about 3.5 inches - can't really remember as I started this ages ago) and then sewed them together into 9.5 inch wide sections.  I then chopped those into 3.5 inch blocks, so the finished blocks were 9 by 3 after seams.  I alternated plain white with the strippy blocks and used plain white thread for in the ditch quilting and also plain white for backing.  I might regret that due to the general grubbiness of the monsters in question but it just made the colours pop.
This quilt took a long time to finish as I made it for Issy in her single bed and then we moved house and put her in a queen sized bed in the meantime!  I know it's a big bed for a four year old but she can have sleepovers and has a massive room and we had one spare so...Anyway here it is on the bed: 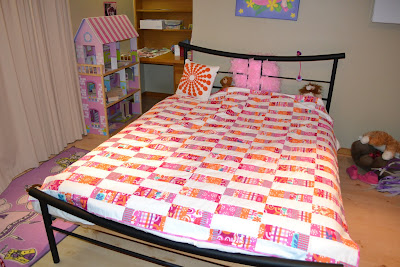 I am fascinated with how orangey it is, despite that not seeming to be a dominant colour in most of the fabrics - I like it though.  Goes nicely with the (unrelated) orange starburst pillow I found somewhere too :)

So the lady in question LOVED it and was very pleased to have something to snuggle under in our cold Tassie winters.  And that's really all that matters in the end isn't it?