August 29, 2011
So obviously I am the last person in the world to make Vogue 1250.  I have made it twice.  Once is red version which is the dress, though left rather longer than on the pattern (I haven't actually hemmed this yet so not sure of the final length).  The other is a teal version modified to be a cowl neck top: 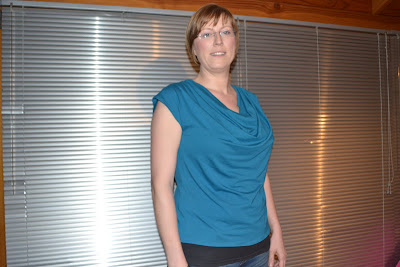 Here I am looking rather awkward in it and with the top draping oddly (neither I nor the top look like that most of the time!).  It was made in a teal viscose / spandex oddment I got from Melbourne Tessuti while I was over there recently.  Oddly I think it suits the other fabric (cheapy Spotlight jersey spandex) better as that fabric is more drapey, but a few washes might change that.  I cut an enormous size 20 (to get the shoulders and chest in there) and then spent lots of time bringing the waist and hips back to probably a 14 and 16 respectively, though am not sure as I did with the garment after rather than with the pattern initially.

Here is a view of the back: 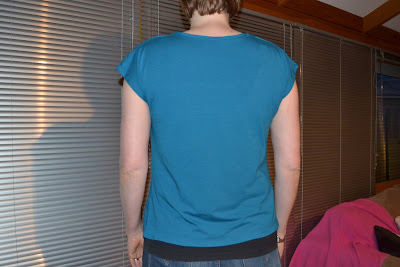 And a slightly better one of the front (though not much...it was dark and we were about to head out!). 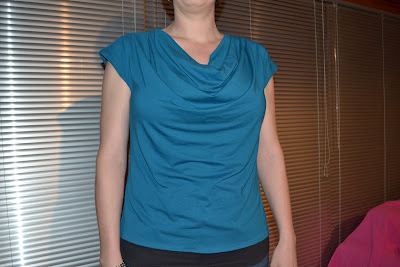 I made it by taking the two main pattern pieces and putting them together.  Then I pretended the top of the two skirt pieces at the back of the original pattern (down to the second adjustment line) were the bottom of the upper back piece (basically to lengthen it).  Similarly I adjusted so the main piece stopped at the lengthen/shorten line and at the front rather than arcing round to the back (as I already added that piece onto the back).  Then I made the top as instructed but ignored the bits sewing the skirt back and skirt to upper back and skipping straight to sewing up the sides.

It was a really interesting exercise in changing a pattern for me (having only made a few items of clothing I have not really done this before except to lengthen and do the usual cut big and narrow in).  I don't know if it was as successful as I would have liked - probably partly due to the heavy weight of the fabric and also mainly due to my lack of understanding of how seams would work when I was making them up at the bottom of the side seams.  I ended up with some odd flarey bits and had to spend more time faffing than I wanted to in order to pull it in and make it look more like a top should.  In the end I got a top which I wore out that night to dinner, which I will also wear to work, in a lovely colour, so am not really complaining!  Definitely inspired to do more stretch sewing and I would like to make this again in the lighter drape jersey spandex to see how much of the difference was the fabric versus my incompetence.  I thought about making the sleeves more sleeveless too so I might try that next time.

All up not bad for an experiment!