December 07, 2011
A few months ago, the husband and I got seriously lucky in an HP Touchpad fire sale and scored two of the little gems for less than the price of a crappy phone.  Ever since, we have wanted to look after them, knowing that discontinued hardware and a super special price actually makes them irreplaceable!  Anyway I found this tutorial from Elizabeth at Oh Fransson!.  This was featured at Sew Mama Sew a little while back and I loved this tutorial because it was simple and not tailored to a device of any particular size (i.e. an iPad!!). 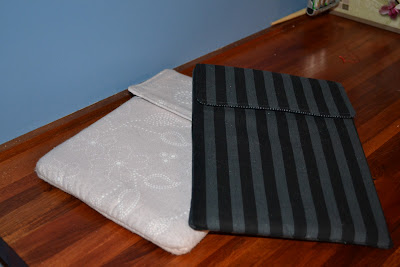 So the lighter one is mine and the other is my husbands.  I made mine first, hence it's all a bit wobbly as I didn't have the thing worked out yet.  My only issue with this pattern was that the instructions for cutting the flap were incorrect - they have a formula for cutting (which why I didn't realise they were wrong until a bit later in the process) along the lines of Width by Height + 1 inch, that sort of thing.  Anyway, for the flap; it says height when it means width - which in the case of mine was an error which was just about manageable, but things are a bit wibbly... 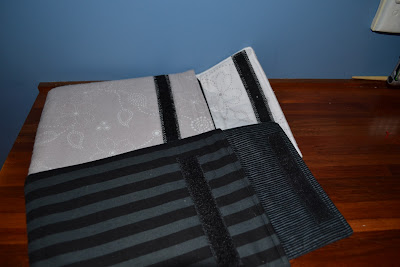 The second time I made this (the stripey one), I had the measurements right and it worked like a dream.  My husband was pretty pleased and it took my less then an hour to make as I had the thing down pat.  I really like this pattern and it was quick and easy with a nice finish. 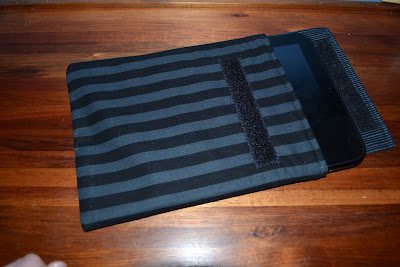 My only other issue (which I know was my issue and not an issue of the pattern) was that my husbands version is still pretty tight to slide the touchpad in and out of.  I suspect that is because the first one was made from a flannel pillow case which would naturally have a lot more give than the woven stripey fabric.

Anyway, I like the pattern heaps and would recommend it.  If you are looking for a quickie chrissie present for a techie (or actually anyone with a similar tablet or laptop) then you still have time :)