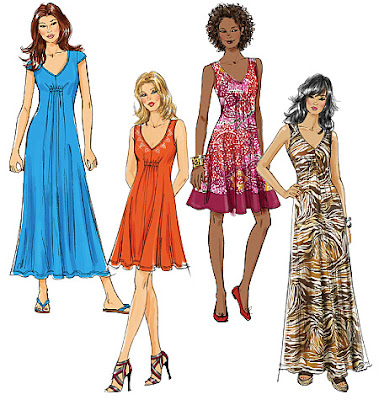 I have been hankering after a maxi dress and my one from last summer was too big for me (woo-hoo!) so I decided to make the longest version of this dress (sleeveless).  However, I couldn't possibly just be happy to have found a one hour dress and make the thing...I had to decide to make the thing in a much more complicated way (partly to get the look I wanted, partly because I didn't have enough fabric anyway).

So here it is (I am looking very stern): 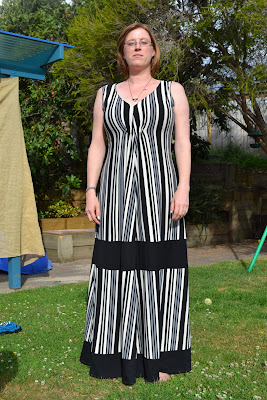 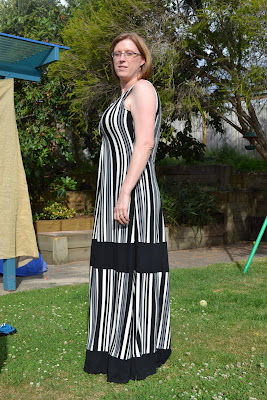 I then sewed the strips for front and back together for each of the separate pieces (so I had three tubes), and then sewed them together to make from the black piece down.  Then it was just a matter of following the instructions for A to get the top "dress" together, but instead of hemming it, I sewed on my extra tube of skirt.  Finally, I hemmed the thing at the bottom.  Here I am trying to convey how the dress looks rather than how these pictures look. 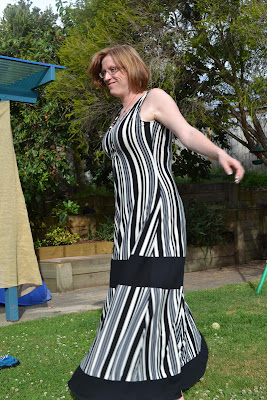 Again with the dress I think my approach of picking largest size for my shoulders and then bringing it in dramatically at the waist is OK, but probably not the best result I could have achieved.  I couldn't really bring the sides in any more without making the gather at the front under the bust look odd.  Definitely time to learn the FBA and how it works in various patterns (god knows how it works in a cowl like V1250, but I can see how it would fit in here).

In terms of this pattern, I liked it and it would really take an hour or so (not including cutting, as they note on the envelope) if you didn't decide to complicate it with additional pieced tiers.  It would also be easily modified into a nice top pattern I think.  The one thing I might change if I made the dress again is the sheer volume of the skirt - it's enormous.  I was trying to show that in the last picture above - there is a serious amount of fabric in this one.  To give you an idea of how much, the maxi dress version, view D, takes around 3 metres of fabric for all sizes (a size 6 in the dress needs 2.9m!).  Compare that to 1.9m for the largest V1250 (which of course isn't long but it's all in the sideways volume for this one anyway).  I think it would be more flatting on me if it was slightly less voluminous, but I like it anyway (it's all swishy and girly).  When I came downstairs in it the other day, my son asked if he could have one, so it must look like fun!

So that's two dresses for me already!  Must be summer :)