The end of the quilt marathon - mum's "zen" quilt

March 14, 2012
I have never wanted to brave making my Mum a quilt.  This is not because she is particularly fearsome or wouldn't love anything I made her, it's just that we have slightly different tastes and I didn't to make her anything she didn't love.

A while back she was flicking through a Better Homes and Gardens magazine and she made a passing remark on how lovely a quilt was in it.  'Ah-ha!',  I thought...I have her now!  I had a closer look and then feigned interest in the young girl type quilts which were on the preceding pages.  I asked to borrow the magazine for those, she handed it over and the promptly forgot it :)  My plan was in place...

Fast forward some time later with her birthday approaching, and I made the quilt in a slight variation on colour to match her room colours better: 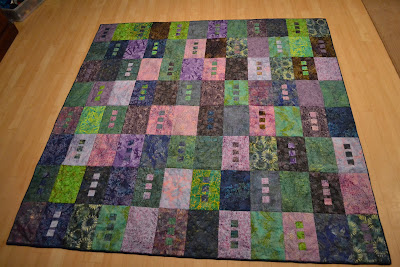 This picture isn't so great due to the usual nighttime issues, but as you can see my version is a mix of blue, purple and green, which is fairly heavy on the purple.  The original was more blue and green but Mum has light purpley lilac curtains so I added a lot more of the purple. 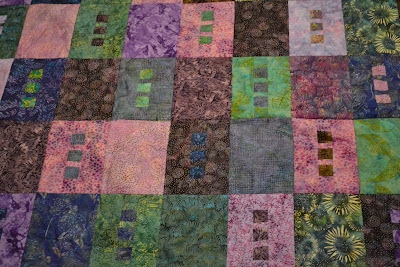 Most of the batiks were purchased online, with supplementary from The Patchworks in Hobart.  I have never been drawn to batiks before but gained a new interest in them from making this quilt.  I am not sure they will feature super heavily from here on in, but I did fall in love with some.  I already bought more of the blue which is down at the bottom left in the above picture to make Issy a dress for next summer. 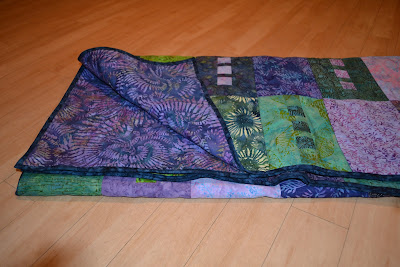 The backing was another batik which Patchworks had on special for half price and of which coincidentally there was just enough left on the bolt.  It is a lovely organic ferny print and I am quite glad I have various off cuts.  I made the quilt big enough to go on the bed but not cover the pillows, with the idea that I would also make some bed head type pillow covers out of the remnants.  I didn't hand quilt this one at all though I originally intended to - it seemed like it would just be lost and unnecessary among all these detailed prints.

Mum seemed to love it, which is the main thing.  The other thing for me is that this signalled the end of the quilt marathon (one for 10th December, one for 26th January and one for 7th March) - all queen bed sized or bigger.  This might not seem like a lot and in fact I also managed to do a whole bunch of stuff in between (fabric baskets, knitting, kids clothes etc).  Still, for me this has been a period of deadlines which I am mostly glad to leave.  It has made me productive but its sometime nice to take them time too!  :) 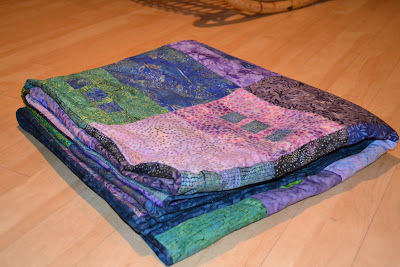 I do still have another few quilts coming - I have already thought of an "overlocked" (/serged) quilt I want to make for a friends son, so that might be in the works soon.  Meanwhile it's all knitting, more fabric baskets for the yarn stash and dressmaking for me in the foreseeable.  Happy days :)