A bloggy friend of mine recently posted that she had joined in with Sally at Virtu's Born to Knit challenge.  This is a drive to make blankets (sixteen squares, each 20 x 20cm) for Save the Children, to donate to vulnerable children at their time of need.  Sally was hoping this would help people who had knitting aspirations to take the plunge and learn to knit.

I don't need to learn to knit.  I can knit already.  I have lots of knitting and crochet on the go.  So much so, that I should really finish some of it.  BUT - it's not all just about me (what?  shock horror...).  So despite the call for novice knitters I breezily ignored that bit and signed up.  The kids in need of help get me every time.

The challenge is a 20 cm square by August (so she has enough time to make up the blanket).  Sally did say I could use to try a new stitch or technique, but I didn't want to be all smartypants or make it complicated (what do you do with the single different square?) so I decided to use this as a time test of my new found continental knitting approach.

What's with the continental knitting I hear you ask?

**the following section will be a bit overexcited and preachy so feel free to skip to the next part...**


In "normal" English/Australian style knitting you hold the yarn in your right hand and "throw" it around the needle after inserting into the work.  In continental knitting, also henceforth known as "awesome knitting", you hold the yarn wound around your left hand and kind of pick the stitches more like you are crocheting.  See this video for a very good demo.  The word is, that this way is more efficient (fewer and smaller hand movements) and that many professionals knit this way for that reason.  Hear that?  I knit like a pro, don't you know :)  Also, I get neck pain when I knit (which I usually try and explain away as caused by anything else so I don't have to confess that's the reason and cease knitting...).  In theory, continental knitting should be better in that regard (I have not yet found this to be the case, but am still finding my continental knitting "feet", though that sounds kind of odd...).  Other benefits are similarity to crochet (so maybe easier for crocheters to learn) and also a generally looser result in tension terms, which is an issue which often plagues novice knitters.

So I recently taught myself to continental knit, and thought this would be a good way to test my knitting rate in the new method.  No, I don't know my rate in the old method either...maybe I should make two squares...

So here is the Born to Knit Square "Race" in step by step form:

Step One - choosing the wool

I had lots of single balls of wool in the stash but narrowed it down quickly to these three: 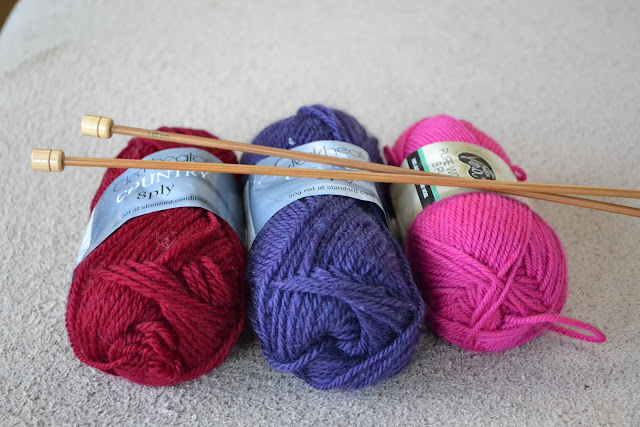 I really liked the red but felt like it wouldn't go with much.  The pink is extremely pink and let's face it, there is probably enough pink in the world :)  So in the end I chose the purple.

Sally said to cast on 44 stitches but that didn't give me 20cm, so I added a few more...then I realised after a few rows that it was super heaps too big and I should trust other people, who know more than me :)  I unpicked it, and cast on 44 stitches.  I am a douche.

So I knitted and knitted.  I am not sure if this took me longer than expected or not.  I think in the end I was looking at around three hours for this square of 44 stitches by 20 cm.  I say 'around' because some of it was done at book club with a glass of wine and some chatting to be had, so perhaps not the most feverish knitting... 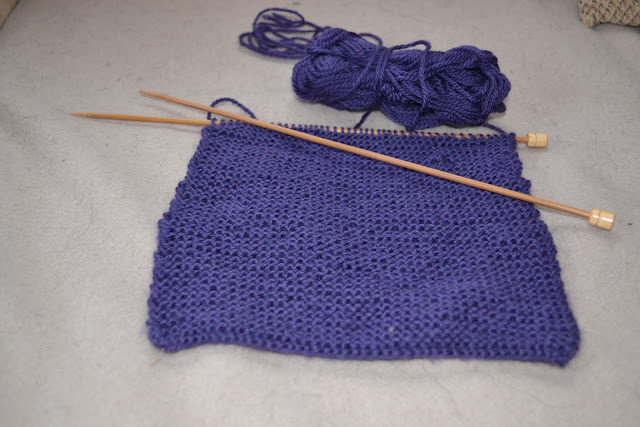 In time trial terms, I do feel like the old way would have been faster, though I have so much more knitting behind me in that style that it doesn't feel like a fair comparison (or even a real comparison, given that I didn't actually knit a square the other way...!).  Sticking with continental for now I think, regardless.

I find it a bit odd how great garter stitch looks made up in projects, simple and just knitting, and how crappy it looks before making up.  Even stocking stitch with it's rolly, curly edges looks better than this when not yet finalised.

No prizes for noticing that my final picture does not, in fact, show the cast off square.  See earlier, where I note my douchey tendencies. 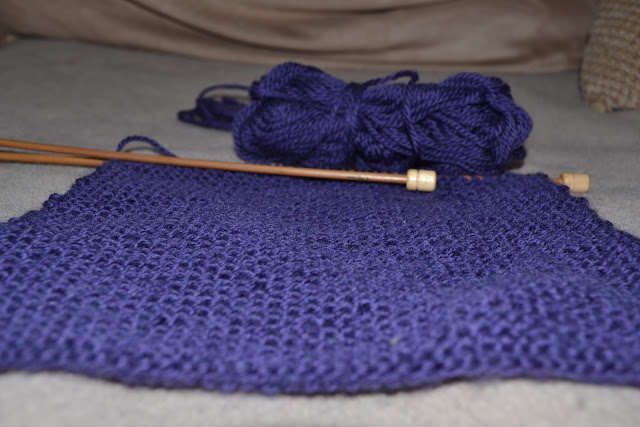 Step Six - post to Sally and await the final product!

They must be using carrier pigeons or people walking slowly between here (Tassie) and WA (Sally) as apparently she has to wait at least 5 days for it to arrive.  I am currently planning my honeymoon to New York (many many hours - at least 20+ away) and am only going for 5 days (well, 5 nights).  Seems like we should be able to get post to another Australian state *slightly* quicker than it takes me to honeymoon?

So I was going to say that's my first from my list of things to finish, but sadly I realise that this isn't even on there :(  Damn!