There is a Thing here in Australia (or maybe just Tasmania?) called book week.  Heck, maybe this is a Thing in the US and the UK.  I didn't have kids or really know many people who did in the UK so who knows?

Aaaaanyway...Book Week.  We didn't have it when I was at school (in the UK). I kind of vaguely knew about it but not enough to know much of the when or the what.  On Monday, there was a reminder posted on the door of the Kinder class where Thing One goes, re the dressing up as a favourite character which would occur...on Wednesday. Yes.  TWO days notice.  Both days that I work.  Craptacular...

Thing One had some ideas along the lines of highly inappropriate Arial costumes which involved wearing singlet tops in the middle of Winter.  I should note here that while Winter in Australia might sound like a thing British people do to get some sun, Winter in Tasmania is actually reasonably chilly; at least at times.  I pointed out to Madam Truculence that she was supposed to be a character from her favourite book (purportedly Room on the Broom by Julia Donaldson) so we set out to magic up a witch costume in two days (iggity, ziggity, zaggity, zoom). 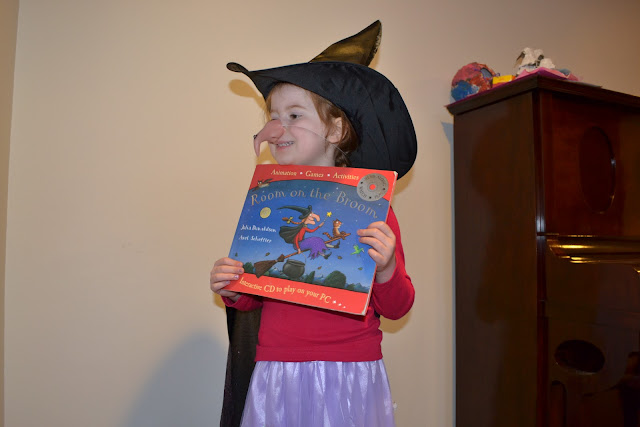 I think we did OK.  In the book, the witch wears a red top and a purple skirt with a zig zag hem.  So I used a fairy dress which already had one and a top she already had.  The hat and nose are from Spotlight.  The only bits I made are either absent or poorly picture in this photo; namely the cape (a reuse of Marcus' wizard cape I made for her birthday party) and the bow from her long ginger plait.  She seemed happy and I was happy to send her in something which had some effort and wasn't just a reused Disney fairy / princess costume from the cupboard.

In other bookish news...I had a birthday recently (half way to 70 but not at all phased by that really!).  My mother-in-law is seriously awesome in so many ways (two night sleepovers for the kids spring to mind as examples of said awesomeness...).  She is always super generous with presents and this birthday I was extremely pleased to get a Booktopia voucher which I used for the books below:

I am still not sure about this one (even though I bought it!).  I aim to sew a lot with stretch, and there isn't much in here.  I also don't know that the look suits me that much.  I do love the taffy blouse and the licorice dress so I will definitely make those.  I have no idea why you would choose the dress / picture on the front when you have the gorgeous picture of the model in the spotted licorice dress!

The other book (not yet arrived) is this:

Again, I don't know if the styles will suit me but having read the blog for a while and seen the odd pattern around by Gretchen I am crossing my fingers there will be things I like!

I guess for both of these books the real thing for me is that they are good manuals for sewing, adjusting patterns and making decisions in the process of making a garment.  Hopefully that will be the case and I can't wait for Gertie to arrive!

What are your go-to books?  I think a voucher purchase was perfect for these as a "see if you like them when they get here indulgence!"