Sewing with Belissa - Or When Good Sewing Goes Bad: Blogtoberfest (3)

October 03, 2012
My posts on a Wednesday for the foreseeable will be a report on my regular Tuesday night sewing date with my friend Alissa (known to my children as Belissa, hence the title).


She decided she wanted to make her daughter a doll similar to those I made for our mutual friends, and also a robot (another super cute ric-rac pattern).

The dolls are the Kinder Girls 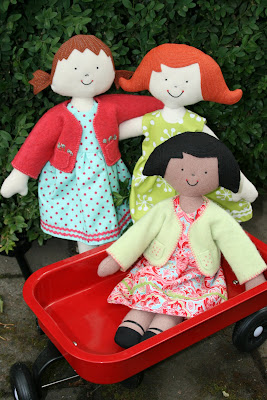 and the robots are the DiscoBots (also from ric-rac patterns) 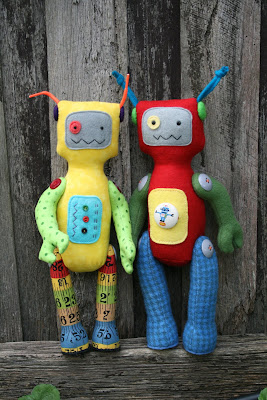 Lis is pretty new to sewing and I am nominally "teaching" / "helping" her (stop laughing...).  Interestingly she is a much more diligent student and much less inclined to just cut corners and fudge it than I would be :) She is going to be a much better sewist than I am in no time.

However...last night she hit her first experience of One of Those Nights.  Every sewist has these (at least I am assuming they do!) and they suck big time.  She came over with her finished doll (pictures to follow later when they are all done) and wanted to start on the robot.  We started about 7.30pm, give or take, and she left nearly two hours later with two foot bases which had gathering stitch around them and virtually nothing else :(

So what happened?  Everything she sewed was somehow just wrong.  Mostly the issue was some rather too enthusiastic seam trimming which meant the seams popped when she turned the robot pieces, but there was also a rather choice moment when she decided just to do the gathering stitch on those foot bases so she had something done, and sewed them to each other instead of sewing the gathering around each base.  That was the point where we completely lost it and laughed hysterically for quite some time.

To her credit she is sucking it up and starting again with the body pieces but it made me think about all those times that the sewing mojo is not just present and how frustrating that feeling is.  Hopefully next week's installment of Sewing with Belissa will detail a more fruitful Tuesday night session!