December 29, 2012
So everyone is doing this in bloggyland - sorting, destashing, putting their house in order ready for the new year.  Agonising over projects unfinished, celebrating those that were, making ready to start over with new plans.  In among all this resolution and reflection I am noticing, there is not so much of the doing.

Before you get all excited that I might be posting some finished projects (and in fact I do have at least two to post but no pictures yet...) this is also my list for next year :)  I too, am doing very little and thinking should-have, could-have, would-have, will-do thoughts.

This list is for knitting / crocheting items only (not much of that here recently) and is grouped by already started, already planned (i.e. pattern / materials purchased) and things I want to make but which aren't yet underway much, if at all.  As ever, the things in the final group are the ones that tempt me most...hence the hefty UFO list :)  I pretty much have the patterns for all of the list so the temptation is tricky to avoid :)


I started this in October of 2011 and it's only about 6 inches deep.  I stopped because I wanted to try folding a piece of cloth or knit fabric from my stash to see if I actually liked this pattern and it suited me...and I still haven't got around to it.  I am making it in a lovely marl grey which will look a LOT nicer than this :)  I should probably do the test described then get on and finished it!! 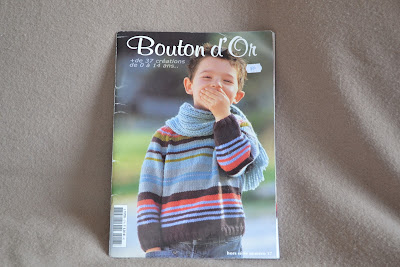 I reached the seaming point with this one and then realised we were deep into spring and my endeavours were pointless for this year at least.  I was so cross I abandoned it completely at that point.  I think it will still fit him this winter (I always make stuff a bit bigger) so I should get on and finish it before we reach another winter!


I have started these in a lovely variegated sock yarn from my local awesome wool store (The Stash Cupboard) which is reds and deep reds and almost purples.  I have done about three inches of 8 needed on the first sock.  Sigh.  Not sure I am cut out for knitting socks but I like the idea so should press on :)


This is a pattern from a Sirdar booklet (can't find a picture) in a lovely denim blue colour for a little boy born quite some time ago now.  I also abandoned this one when I realised spring was upon us, though I had only done a small amount of the back panel.  It was going to be a size 000 (newborn to three months).  I think I need to buy more wool (with limited chance of finding the wool in the right dye lot) and then start again.  I have been so embarrassed by not making this yet that I have been avoiding Oscar's mum, which is rather stupid and childish, but there we go...


This is the one I am ITCHING to start.  I have the wool (a kind of dusky blue) and I can't wait!

Scallop of the Sea Clutch:


This is other one I am ITCHING to start :)  I don't really have all the stuff for this, though I might if I dig in the stash.  I think it's worthy of a special shopping trip to pick exactly the colours I want.  Which means some other projects to stash bust first - as there is no room at the inn, fabric/yarn storage wise...


I have some self striping pink and orange yarn for this but am not sure it's the right thing.   Regardless I love these...


Which one would you pick?

I bought and made this pattern ages ago but mucked it up a bit then realised my error.  I couldn't easily rectify it so wanted to start again - but haven't yet.

Rugs or Cushions for the kids:

I love this owl and these pirate granny squares.

I think probably a cushion rather than a blanket, particularly for the pirate ones.  I don't like them as much as the owl ones but Marcus was born on talk like a pirate day so it's kind of mandatory.

I have had my eye on this ever since they first posted it.  I might want to wait and buy the wool at Purl Soho (when I go on my mythical honeymoon to NY...) as that would make it pretty special.  Plus it's a big project and I *might* have enough on.  It deserves coverage though as it has remained a constant on my to-do list.

So that's it for knitting and crochet (until I find 100 other patterns...!).  I didn't list these in the order I plan to tackle them; I don't really know that yet - except that I really really should finish those that are nearly done first I think!!  (Stop laughing...)