February 03, 2013
I was very happy to be chosen as a pattern tester again for Heidi and Finn.  I love their patterns and have previously made the Cowl Neck Jumper Dress and also the Uptown Hat (which I also pattern tested here).  I have the Urban Unisex Hoodie pattern ready to make a hoodie for Marcus for this winter (it's on the list you don't know about yet..!)

This time the pattern was the (not yet released) size 6 - 12 Ballet Sweater.  The smaller size is already in their etsy pattern shop.

This sweater is stinking cute!  Super quick and easy to make and a massive brownie point winner with any young lady as girlie and ballet obsessed as mine.

Here is my version.  We start with the serious "getting ready for the dance shot"... 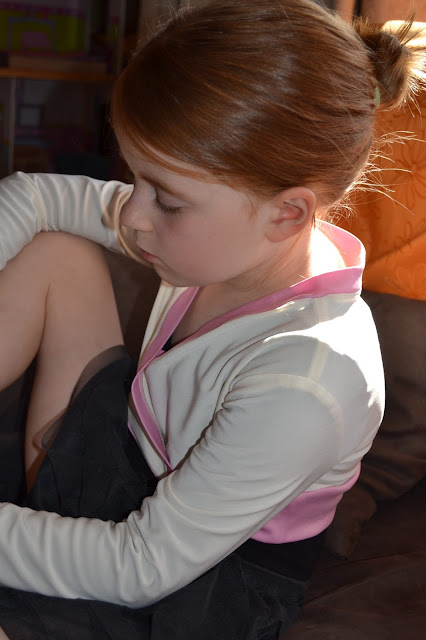 I took madam with me to the mighty Spotlight to pick fabrics for this number.  She chose the combo herself and was surprisingly not distracted by the several hot pink and lurid other options they had there.  I wouldn't actually have chosen cream had she not been there - partly as it's sheer enough that you see the seams (not that she cares) but also for the dirt factor.  She might pretend to be a princess but she certainly doesn't behave like one!  (Well, maybe The Little Princess...).

Here's the how happy with myself am I? picture: 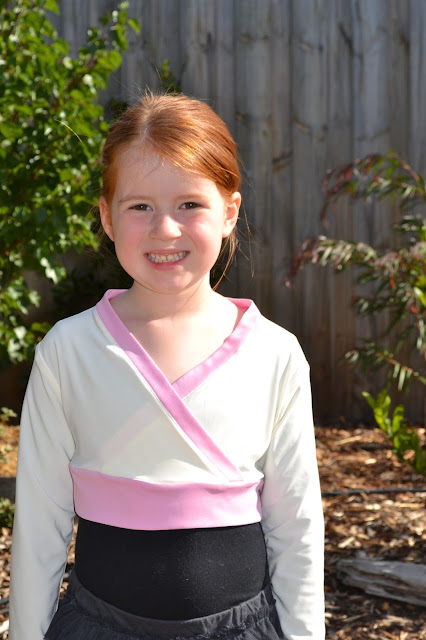 I chose to omit the ties on the pattern as someone is very "I can do it myself" right now and she can't tie a bow yet.  I just noticed I didn't press the band as nicely as I could have, which is irritating me.  There were even specifics on doing this in the pattern *hangs head in shame*.

On that note, I should say I like the pitch of these patterns.  They are reasonably brief in words, but with lots of pictures.  I don't really need every single thing explained, so I prefer this.  For example, she tells you to baste the front pieces together at one point, but doesn't detail what a basting stitch is.  I think that's good (we all have google, surely?).  Similarly she doesn't harp on about how scary knits are or whatever, she just gives you various options depending on equipment (i.e. serger/overlocker, machine with stretch stitch etc), all of which will likely achieve a good result.  I don't like it that the "put it together at home" pattern pieces don't have those line up arrows on them, but on this pattern which is super simple (three pattern pieces), it's not exactly a show-stopper.

Apparently it meets the twirling test (I love the closed eyes here...she wasn't blinking, she is just super serious about twirling!): 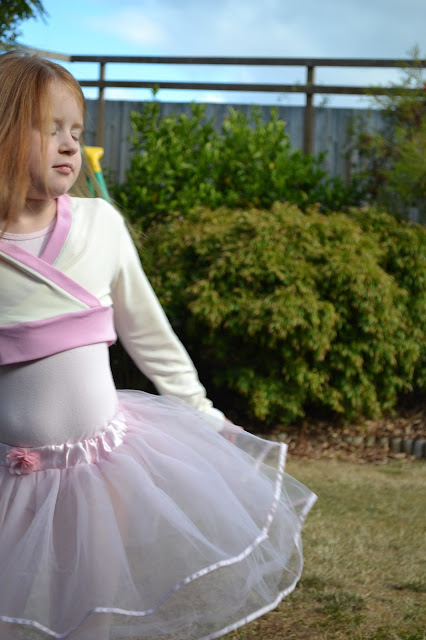 And yes, I had to whip up a skirt to match.  I used the leftovers from the band of the top for the waist band, and a folded over length of the main fabric to make a gathered, semi-twirly bubble skirt.  It is gorgeous, but annoyingly perhaps the best picture of it was from the back (whilst twirling again, of course): 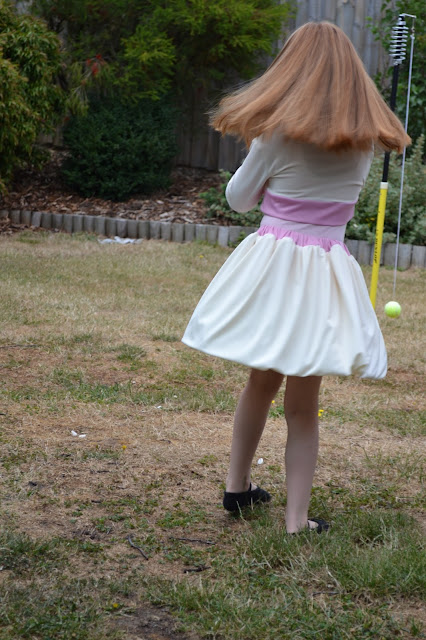 And then the serious, dreamy, ballerina time was over.  She had reached the "what more do you want from me mother" phase: 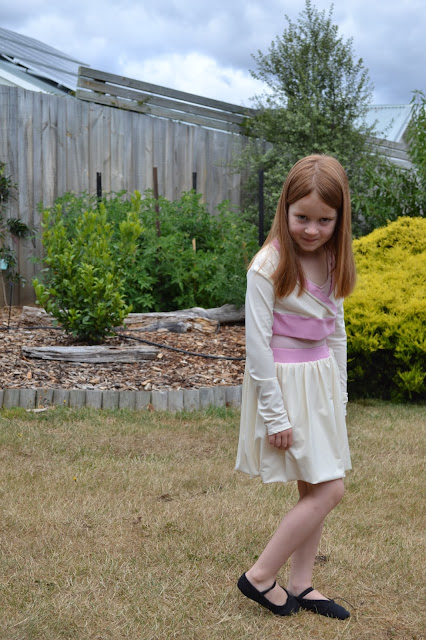 I guess every ballerina has their limits!