February 05, 2013
So as previously mentioned, when I saw Tessuti had a lovely pair of relaxed fit pants called the Chloe Pants, I knew I needed to buy the pattern (my name is Chloe, in case that's not obvious..!).  While I was there I also bought some lovely chocolate pin-striped linen to make them.

I am definitely not brave enough to dive into my first pair trousers without at least one muslin and am in fact about to start my second.  So here is the first attempt:

As you can see they suit some very wooden striding about in the garden :)  These are made from a kind of olivey green homespun and from the thigh top down I love them.

While I could just wear super long tunic tops and call it finished, I am not that kind of girl (anymore - it surprises me a bit).  And this is the reason:

This can only be described as butt-sag, and it ain't pretty.  There are a few issues causing this...Issue one is that I have a flat-ass, which I inherited from my mum.  She hadn't realised she had a flat-ass (or at least hadn't thought enough about it to give it a name...) until I pointed out my fit issues with this to her the other day.  I kind of wish I hadn't for her sake :)

What I mean by flat-ass is that my bottom is not all perky rounded out like the J-Lo's of this world.  I have read that you can have surgical implants, but it seems like a lot of effort for a part of me I don't see - so I might adjust the pattern instead... 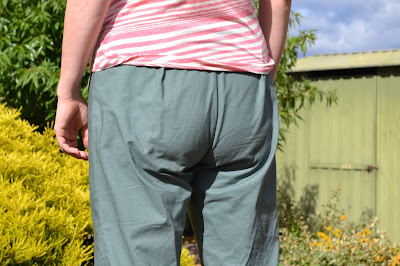 And here is a close up of my bum in all it's flattened glory.  That wrinkly creasing under the butt cheeks should be filled with what might be called "booty" if I had one, but I don't, so instead there is lots of excess ease.

The other issue is that these are too big around the waist / hips area: 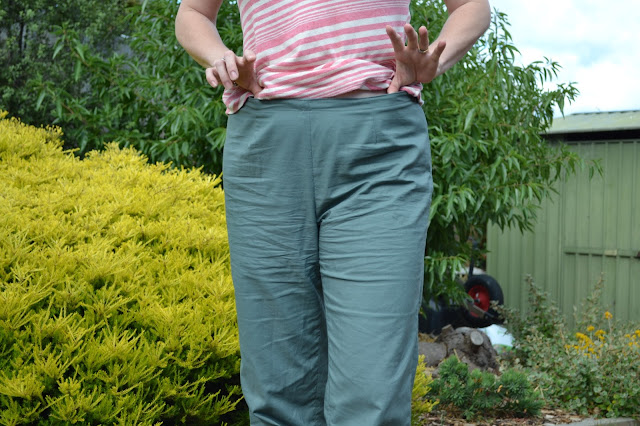 This picture would be far more illustrative if I thought to take it from the side without my hand in the way, but you will have to imagine how far my thumbs are out from my waist (a good inch and a half, if not more). 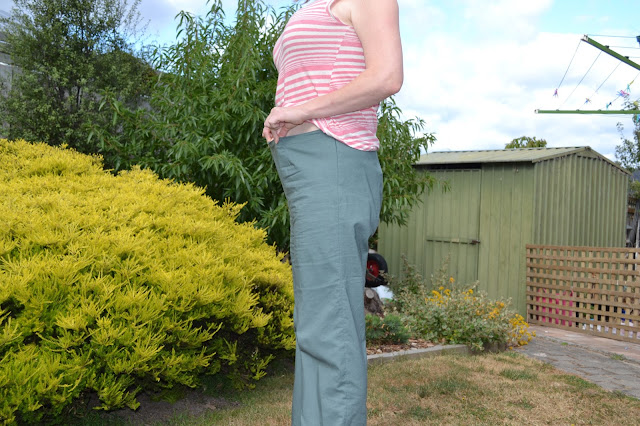 This enhances the butt sag and also makes the trousers a bit uncomfortable because they keep slipping down.  They are wearable but only for slobbing about (happily, I am masterful at that).

So - what are the main aims for muslin two (this time in a dusky grey-blue homespun)?  One is to take a tuck out of the pattern right about where my hand is in the picture below:

This would give roughly the effect shown below - which fits the flatty much more flatteringly (too many f's and t's in that sentence...).


I will also take some in from the sides and a fair bit from the waist.  According to measurements I thought I needed to add some to the waist but I have ended up taking most of that back again.

I would also like to change the pattern a bit to have the zip at the front rather than the side, and to add a waistband (so I can wear a belt, which I like).  This sounds like a big change but isn't really, particularly if I keep the zip as an invisible zip so I don't have to make a fly front.  I will probably do it on the next muslin and then decide whether to keep the change in the linen version.

After that, I think a winter version in a drapey wool would be amazing, perhaps with a cuff?  And a skinnied version like the pants I just altered which I haven't yet blogged.  Ooo and a light grey linen version for next summer, maybe with a kind of cargo-esque pocket detail.  Oh yeah and...

I should probably sort the fit and finish the other muslin first :)