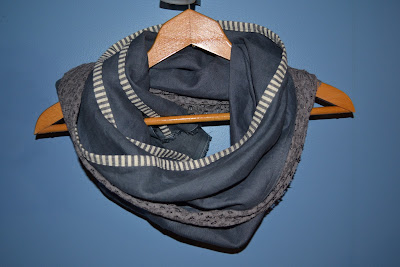 This scarf started out as the leftovers of an offcut I bought at last year's craft fair from Duckcloth (how thrifty!).  That bit is the stripey trim.  I bought that linen to make Marcus a pair of shorts (done, not yet blogged) and I had some left, though not much.  I started seeing a scarf out of all the remaining scrappy bits, paired with some plain grey linen I had.  I wanted to add a lacey trim but was wavering as I am not really a lacey sort of person.  Then I stumbled across the grey lace fabric in spotlight for $4 a metre and it was perfect - still lacey, but also still me. 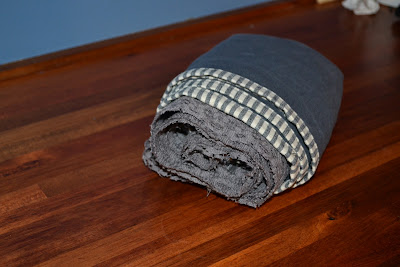 So I got all the pieces I had and worked out how long it could be and how wide I wanted it and how much of each fabric I could have in the mix and then I just got into it and cut and sewed!  I created a kind of binding strip from the stripey linen (cut 2 inches, fold in half, fold edges into the middle - binds 1/2 inch along the edge) and sewed it along one of the long edges. 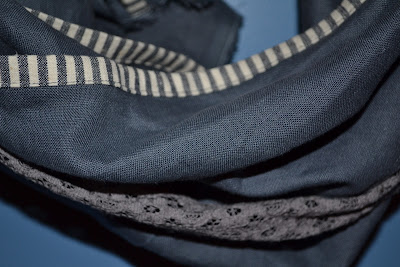 I left the short edges raw.  They were the selvedges of the grey linen and are already a bit frayed but stay stitched to prevent further fraying.  I wanted to preserve some of the unstructured linen look. 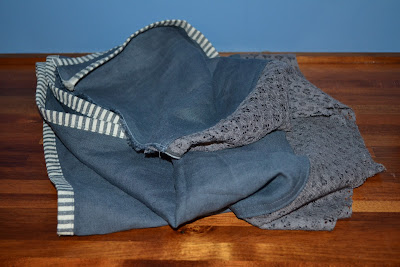 I am still considering whether to sew those short edges together and make this into an infinity scarf.  I love the loopy, floppy look when I am wearing it, but it is just about wide enough to also wear as a bit of a wrap / shrug to cover exposed shoulders - which I would lose if I made it into a big loop. 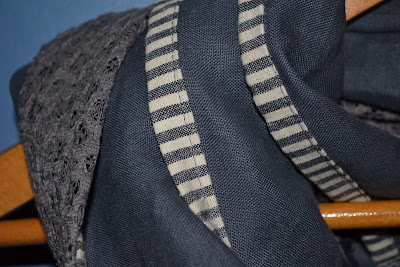 I love that this scarf turned out exactly how I envisaged it (hence the name!).  I also love that I had a precious offcut and managed to get two great pieces out of it and I still have a little bit left.

The great thing about this sort of project is how quick and free it is to sew.  I didn't worry overmuch about the straightness (or lack thereof) of my sewing along the stripey binding, as the whole effect is meant to be a bit shabby and free form.   The cutting was about half an hour (including decision making which is always the hardest part for me!) and the sewing was probably about the same.

However, the absolute best thing about this project is how good it made me feel - quick reward sewing with gorgeous soft colours and lovely fabrics;  it doesn't get much better than this...