April 15, 2018
Having been very scared of the RTW fast when I signed up, I have found the first quarter to be a breeze! I haven't felt like buying anything and am much more inspired to sew.

I have made 4 finished items: 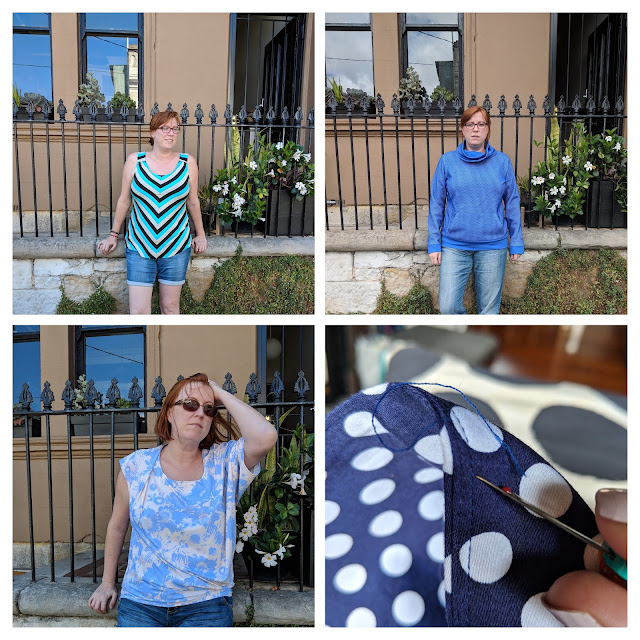 They are the Style Arc Billie Top (blogged here), a Seamwork Aurora top to demonstrate piecing stripes to create chevrons (for a Sewcialists post here), the Paprika Patterns Jasper with crossover collar addition (blogged here) and a mystery garment which is a pattern test that hasn't yet been released.

I have also progressed a Cashmerette Harrison shirt and Ames jeans after attending one of Jenny Rushmore's workshops in Sydney (aaaaaamazing), but they aren't finished so they will count in next quarter's round up.

I do think I am still not sewing things I will wear a lot.  The jumper above is probably most likely to be worn, but it's not cold for very long here!  I need to still hone in on items which will be worn most and suit my style best.

Finally, I have found the social aspect of the fast a bit meh.  There are so many people doing the fast that the Facebook group is very "loud".  It sort of swamped my feed for a while and I just started ignoring it.  In addition, there are some very odd debates about "the rules" in the group - people posting to ask for exceptions, then others getting outraged they would want an exception, then others defending the exception etc.  It just feels like people should make the fast work for them and be a bit less rigid about it.  I am not sure what would work better for me - maybe some subgroups to let people connect a bit more?

Regardless, the fast is working for me as a spur to buy nothing and sew more, so that's great!