October 28, 2012
One of the things I like most about sewing is doing it for other people.  In particular, kids seem to revel in the idea that you made something for them specially, without all the attendant worrying about whether they really like it and it's their style that goes with sewing for adults.  Kids just tell you if it's wrong - crushing though it is to hear :)

My cryptic post from the other day had to be cryptic so my friend Belissa didn't see what I was making her daughter for her birthday.  I had originally planned to make her a matching "Swansea" dress like the one I made for Issy, but I had a bit of a fail when I tried the bodice on her (just to check fit) and realised it wouldn't fit over her head.  To make it fit I had to unpick the front pleat (which was kind of the point of the dress) and then the neck would have been all swampy and large when on.

Rather than revisit the design, rework the dress etc, I chose just to abandon the bodice part (for now...) and make a different dress with the same fabric.  So here is Gemma's 4th Birthday Dress: 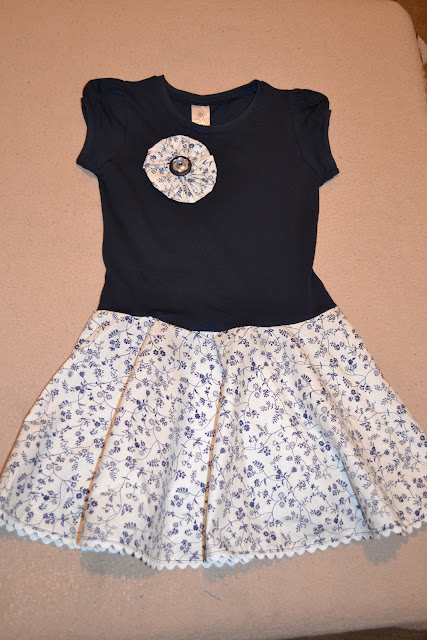 A circle skirt with ric-rac trim, attached to a (shop bought) t-shirt with yo-yo embellishment.

This is very similar in basic construction to Issy's birthday fairy dress, except that the skirt was a single layer of cotton and was finished with a ric-rac trim instead of the overlocker.

To make the dress I did the following:

...decided on the waist measurement.  This is not the measurement of the small person's waist, as this needs to have a fair amount of ease to allow the dress to be pulled on and off over the head - so the woven skirt part has to "stretch" as much as the t-shirt top.

...folded the fabric into four 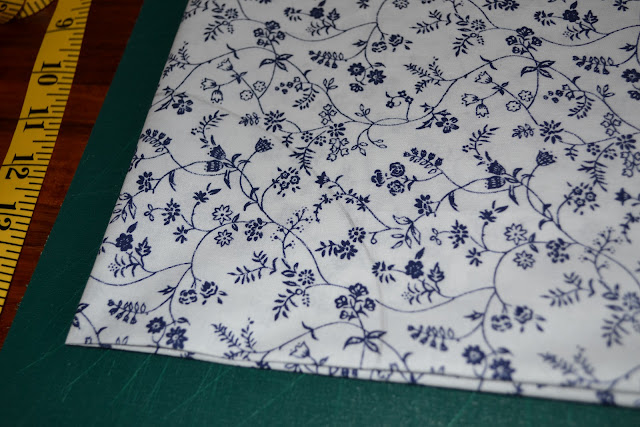 ...cut a circle skirt out (there are lots of tutorials on doing this, but basically you use Pi formulae to determine how many inches down to cut the circle - this is the radius, and then cut another circle down however much you want the skirt to be in length). 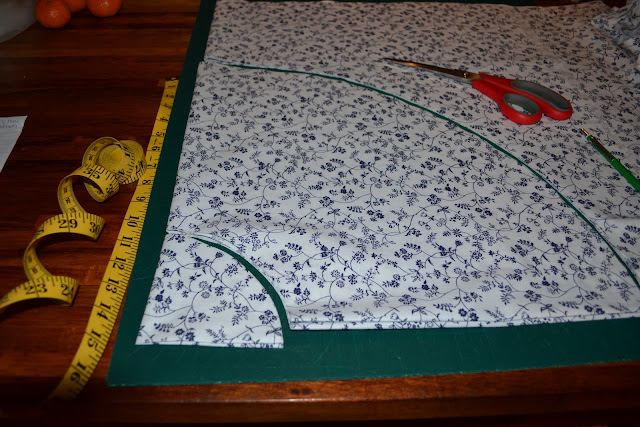 ...came up with a cunning plan for an embellishment using the circle I cut out for the waist 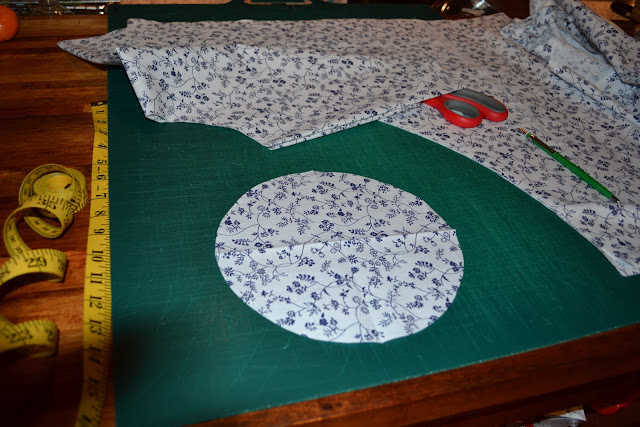 ...sewed ric-rac to the right side of the hem, then folded it under and top stitched it in place. 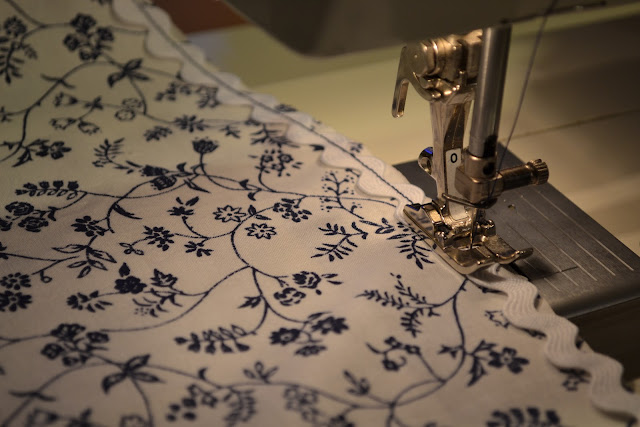 This is a great way to finish a circle skirt hem without an overlocker.  Hemming them the usual way (fold up, fold again, stitch) can be tricky due to the curve.

...I followed Heather Bailey's excellent tutorial on how to make a yo-yo 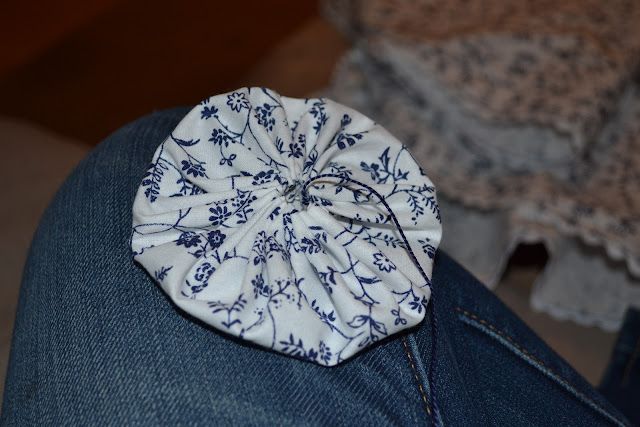 ...found some cute buttons to finish it 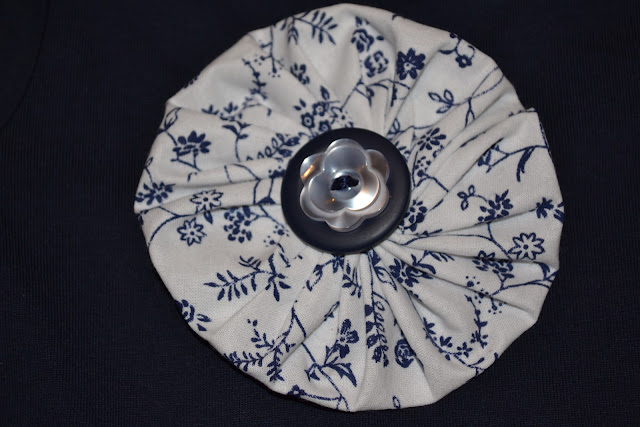 ...and sewed them onto a shop bought t-shirt (you may be able to tell which shop...) 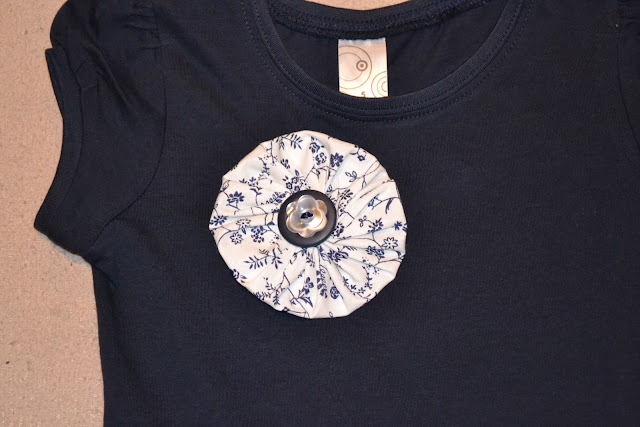 ...and I attached the skirt to the t-shirt with a long zig-zag stitch, stretching the t-shirt a little as I went to ensure there was enough give around the skirt attachment to make sure she can easily get the dress on and off over her head.  I finished the inside seam of the cotton part, and left the t-shirt reminder in there which kind of acts like a seam guard. 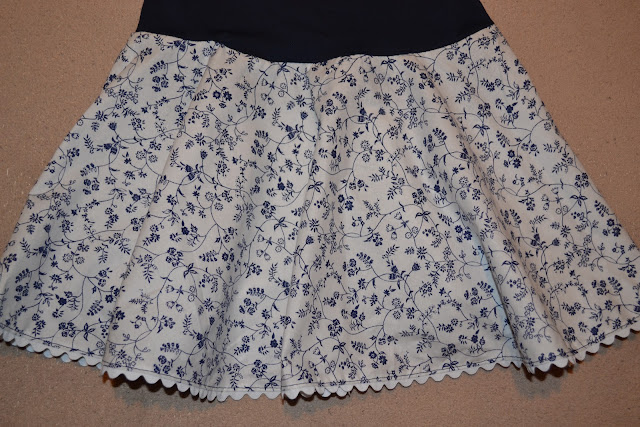 I was very very pleased with the results - in fact this might be one of the favourite things I have made.  I wasn't that in love with this fabric when I bought it cheap off a friend, which I why I made a "muslin" of the swansea dress out of it for Issy (below) but now I kind of love it.  It looks so good with the really strong navy of Gemma's dress t-shirt top.  I think the two dresses go great together too - as a same but not super matchy set of outfits for two friends :) 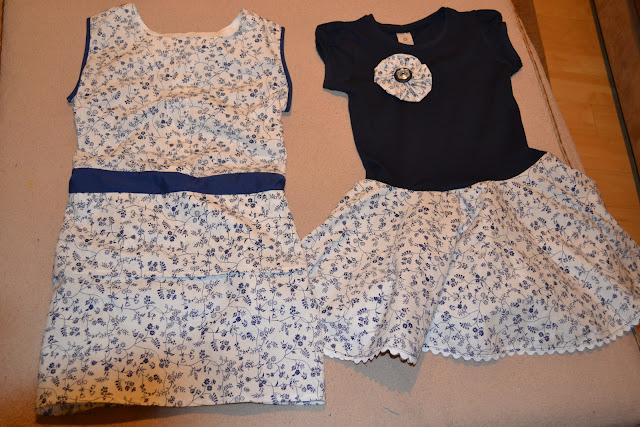 See you "tomorrow" for more catch-up for blogtoberfest!