A quilt for my sister-in-law

February 15, 2012
My sister-in-law has pretty great taste in home decor stuff so I was fairly nervous when I decided to make her a surprise quilt for her birthday.

At the Melbourne craft show (2011) I found this gorgeous screen printed linen from Duckcloth. 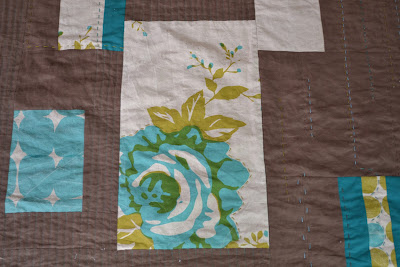 I chose the large scale floral print ("Rose Peacock and Seaweed"), the mergey blobs ("Stoney Peacock"); both shown above, the sticks ("Boardwalk Peacock") and the green and blue dots ("Connect Seaweed on Raw"); both shown below. 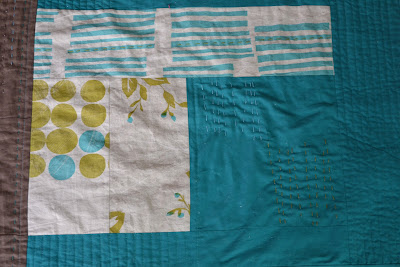 I also bought some brown linen from Tessuti in Melbourne and some teal solid cotton from Patchworks in Hobart.

Initially I struggled with these fabrics more than I thought I would.  I wanted something to echo the randomy placement (technical term there) of the shapes included in the fabric, but that would also how them off to their best advantage.  I wanted one of those super modern bitsy quilts that I love when other people make them, but I really struggled with my inner desires for symmetry and order and matchy matchyness (more technical terms).  Eventually (and with my sister-in-law's birthday looming) I decided on the design below. 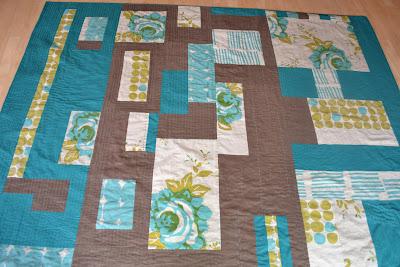 I am mostly quite pleased with the end result, though some bits please me more than others.  I enjoyed the process of making it up and it was a good thing as I wasn't sure on the size required - it could have been for a spare double bed or their king size bed so I had to come up with a size which would work in some way on both.  I made it so it would fully cover (but not swamp) the double, or would sit nicely below the pillows on the king.

I was really really pleased with the quilting I decided on - I often just do some stitch in the ditch and then switch to the perle cotton for chunky hand quilting.  This time while I included some hand quilting, I also stepped up the machine quilting a bit with lots and lots (and lots!) of parallel lines, almost all in one direction: 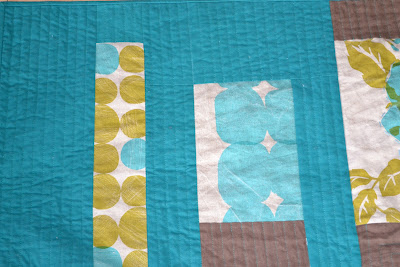 I also did some quilting around the flowers (which isn't really displayed that well by the picture below): 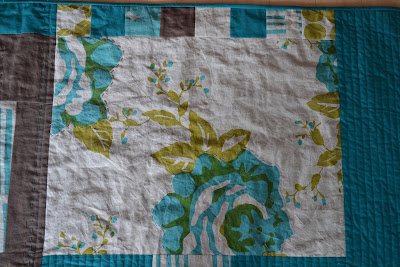 and some running stitch straight (yet randomly offset lines) which are somewhat visible below.  I love how the blue cotton stands out against the brown linen. 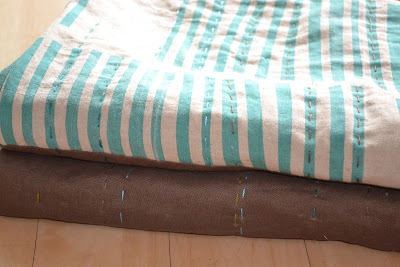 I backed with another solid, this time a kind of lighter bluey green (I think it's called seagrass or similar) which looked great with all the quilting on the reverse.  Apparently I only wanted to show you an artsy corner of this...plus a small child's foot which crept into the picture somehow :) 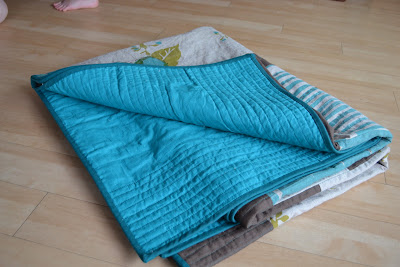 I finished in time for the birthday (not bad going considering my sister's quilt was only finished on 9th December and my sister-in-law's birthday was the 26th January!) and she seemed to really like it.  I haven't been over there recently but my mother-in-law reports it is on display on their couch in the living room.  I expected this to grace their spare bed (or maybe their bed) so to have it in the more public bit of their house is a pretty great compliment.

Onto birthday quilt 3 - hopefully in time for early March!