So the young lady of the house turned five on 12th May.  She is now especially big and important and grown-up.  Someone at another birthday party asked their son to move "out of the little girl's way" the other day, and she turned to him and solemnly informed him that "actually, I am five years old".  Apparently a little girl no more :)

I, on the other hand, consider five to be the perfect little girl age.  They are worldly enough to know what is special effort (hand making stuff for them for example - hurrah!) and innocent enough not to think it's daggy or to have to not be excited by anything.  For her party I organised a fairy to come to our house.  Happily we have a biggish house and ten kids (including her and her brother) was considered sufficient (more than fourteen apparently incurs the need for an additional fairy...!).  I dug out the twirly fairy type dress I was going to make her ages ago and got to work:

I am so ridiculously pleased with this dress.  She had a store bought thing my sister sent her which was similar (t-shirt top, tiered skirt not circle) which she loved.  When she grew out of it I set about making a similar one with the three layer circle skirt for supreme twirling action (2 layers chiffon and one layer satin).  I let myself get all worked up and sidetracked by someone asking me how I was going to attach the skirt (with non-stretchy cotton) to the (stretchy) t-shirt.  I left this awesomeness in the bag for literally months :(

Then I sucked it up and decided to finish it for the party:
After trying it on her, I overlocked / serged the edges of the three skirts (mmm fun times...) and then tried it on again.  Looked great!  She loved it!  She suggested a butterfly on the front of the t-shirt...thanks kid!  I made it up out of a single layer of the chiffon (edges overlocked) which was semi gathered in the middle to make them wing-y (it's totally a word) and then secured to t-shirt with a purple bias binding I had with a ribbon over the top.  I think I might have added wool antennae too. 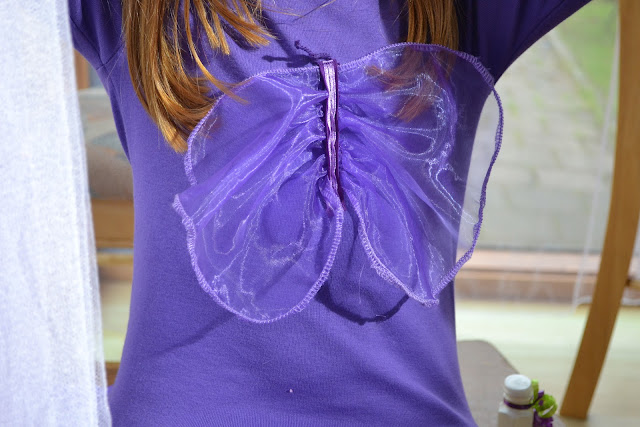 She deemed the butterfly to be good (phew!).  I had the super agonising moment where I asked her if she wanted to wear this or one of her other (bought) fairy dresses for her party...she chose this!  I was stoked :)

The rest of the party was great.  I made some simple party bags out of stash fabrics:


The whole party was lovely - I got to do the bits I really wanted to do (sewing things, spending time with her at her party and craft with the kids) and to hand off the bits I was less confident tackling (cake - to my husband, face painting and dressing up - to the fairy).

And at the end of it all - she was tired and happy and still twirling! And so beautiful. 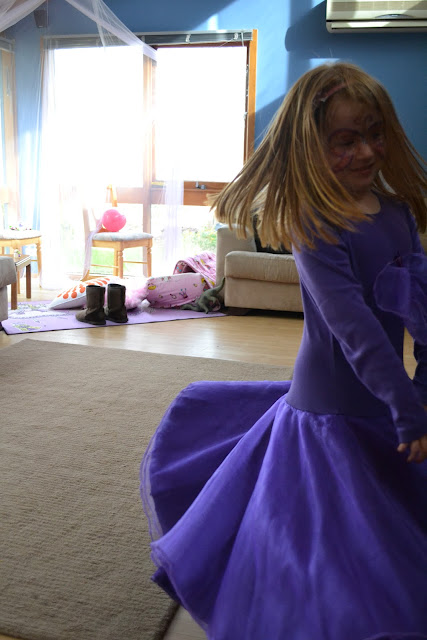