April 24, 2011
So there has been lots of finishing off recently.  This one was in fact finished before the infinity scarf, I just got a bit excited and blogged that first...So we have a cane / bamboo rocking chair which is a bit harsh to sit on without some padding underneath you.  Mum used to put a mexican fringed rug on it and used the fringes to tie the edges but the rug is now MIA and I needed something similar.

Cue a class at Patchworks (Patrick Street) on quilt as you go or block by block.  This is something I have wanted to do for ages - one of the most prohibitive bits of making quilts is the sheer cost of getting things professionally quilted.  Am not saying their job isn't better than the one I would do or that it isn't worth it for projects which are special, I just can't afford to do it all the time sadly...I also wanted to try more machine quilting myself but it's kind of hard when all the quilts you make are at least large single bed size.  Getting control over that amount of quilt in a normal machine is pretty tricky so not the ideal learning conditions for freemotion quilting!

This project is ideal for practicing those skills - single blocks of quilt top, wadding and backing fabric made to "quilt-as-you-go" with assembly later via zig zagging the blocks together and attaching sashing over the front and back join.  So here it is: 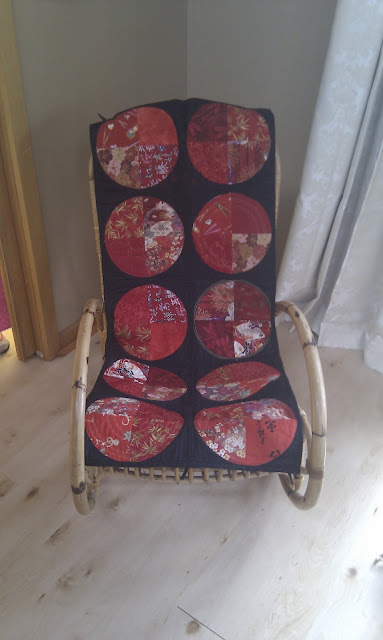 I used a black with irregular grey spot for the background on the front and a related fabric (more spots so more grey) on the back (both from patchworks).  The blocks are pieced from red asian fat quarters and cut with circle templates.  They are just appliqued onto the block and then the block is quilted. 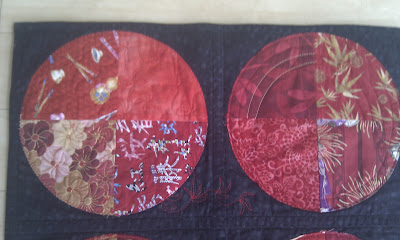 Here is a detail from some of the quilting on the front.  I decided to spill over from the blocks themselves to reduce the separation of the blocks, which I really liked.  On a couple I did quilting around the circle instead of inside it, but I didn't like that as much.  I also would have liked to make the ratio of circle to containing square larger so there was more border around the circles, which might have made the quilting around the circles more effective and give more options here.
This is a detail from the back (its actually the block shown above with the leaves/flowers spilling out but the other way around as it was easier to fit in this way): 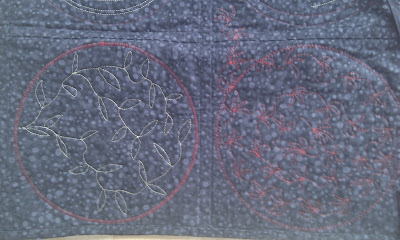 Its a shame the red flowers/leaves (I can't decide which they are) on the right are blurry, but you get the idea. The sashing was just joined with blind hem stitch, which I think actually added something to the quilt.  You could of course make them invisible in the usual binding way (straight stitch them on and then slip stitch them down by hand).  I just didn't think it was warranted here (am a bit lazy) and also thought this might be more sturdy, with the kids climbing all over it.  I made little ties out of leftover strips of binding and then just hand sewed them to the back where they needed to be to attach it to the chair.
Definitely considering a bigger quilt in this method so I can practice more machine quilting, its a great way to hone those skills and not be daunted by the scale of the thing.  There was also another method in which there was no sashing on the front, but there was a kind of fold ridge on the back which wouldn't be as nice to sleep under or if anyone could see the back.  Might have to do more research on the different methods - I bet there are more out there!