A Barrel of Monkeys

July 10, 2011
This post should rightly have come in June as well but I don't seem to get much time to detail all this at the moment. 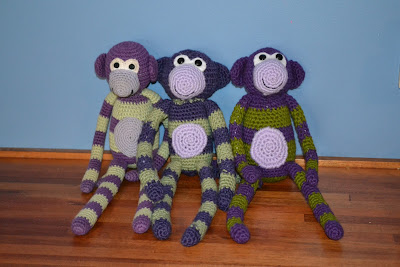 These began with the monkey on the left, who was a present from my Auntie  (shop bought) when Issy was born.  Then Issy's friend Mia fell in love and didn't want to return original monkey, so I decided to make one. I found the Supermonkey pattern in the Arigurumi (Cozy) book (and in fact this was the reason for buying the book) and thought he was similar enough for some adaptation.  And so the monkey in the middle was born.

Two things led to the monkey in the middle becoming stunt monkey (muslin monkey, Marcus' monkey) rather than Mia's monkey:

If you look at the pictures more closely (original is top, first attempt is underneath) 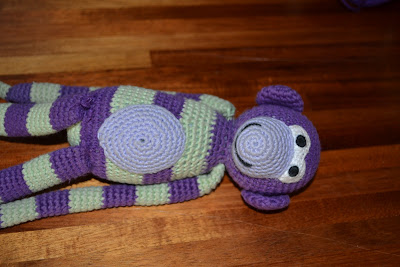 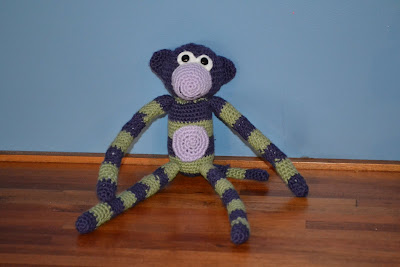 then suddenly the differences and dodginess of stunt monkey become really obvious.  The crochet on his arms and legs is kind of patchy and inconsistent, particularly in the colour joins.  This was made before lots of practice and also before I found this tutorial on jogless colour changes.  Look deeper and you realise the body is a straight up and down tube, whereas original monkey's body is a pleasing teardrop shape; the patch on his tummy isn't as nicely done etc etc.  In addition, stunt monkey was very stuff by comparison to original monkey - I suspect original is made in a cotton yarn of some kind, though sadly I didn't manage to source anything similar here.

So I started again *sigh* and made Mia's monkey. 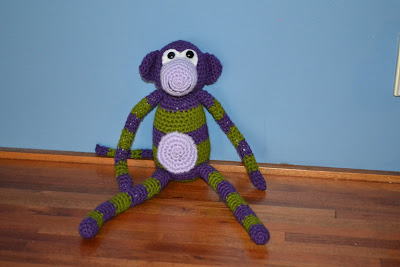 I think the differences are noticeable between stunt monkey and Mia's monkey (i.e. attempt one and attempt two), especially in the colour changes and the body shape.  There is still some stuffing showing through in places but he was also a lot softer and much better made!  So he now lives at Mia's house while stunt and original monkey live with us (and having two has in fact stopped a lot of fighting so it's a win-win!).  I was a little bit sad to give any of them away in the end as they looked pretty good all together: 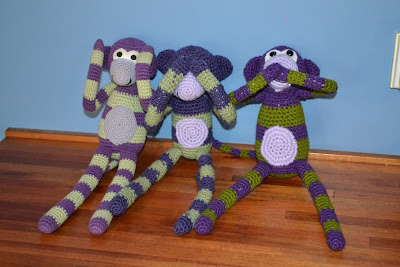