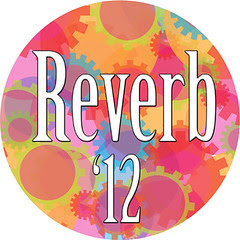 I seem to have a thing for joining in with Kat from I saw you Dancing.  This time she is hosting Reverb '12, the idea being that you use December to reflect on the year that has been, and start planning for the next year.  I wouldn't usually enter this as I tend to focus mostly on the sewing/crafting side of things, but I decided to give a whirl anyway.

I am not likely to post every day (though I enjoyed doing so for Blogtoberfest) but might try and catch up roughly weekly or perhaps twice a week.  I will centre my responses on the crafty side of life where I can I think - makes it more in tune with what the blog is about and also it is an area where I need to take stock of what I am doing and why, plan for next year etc - so it fits nicely!

The first three days have questions and answers for me as follows:

How are you starting December?

Perhaps not surprisingly, lamenting/wondering where the year went.  Craft-wise, I started the year with a resolution to try my hand at bra making, and I still have that resolution.  I think I will start by making the list of all the UFOs and planned projects and work out what I really want to get done in the short, medium and long term.  Then try and stick to it...hahaha!

What was your most significant spend in 2012?

Sewing wise there wasn't really a single big spend.  My most useful spend was a pressing ham (about $20).  My most useful (amazing) non-spend was an overlocker, which my friend just gave to me.  My biggest single spend would have been a new (rather large and suitable for sewing...) dining table; except Freedom can't get their act together and ever get the damn thing in stock.  I dread to think how much I have spent on fabric, even though most of it was on sale.  Happily I don't tally that up or keep receipts or whatever so I can't even guess!  Maybe I should do that in 2013?  Shudder...

To get a grip on all the things (kids, school, washing, lunches, sewing, UFOs, clutter piles, dog walking, exercise) enough that I can let go a bit and stop always feeling like I should be doing something else.  I think it would make me a much better parent and partner, and probably a much better sewer - as I wouldn't be rushing and flitting from project to project.  I feel like one of those "how to do ten minutes a day and have an organised life" things might help me...but it doesn't seem much like letting go!  I guess it would stop me having to think about it all :)

Well that was interesting!